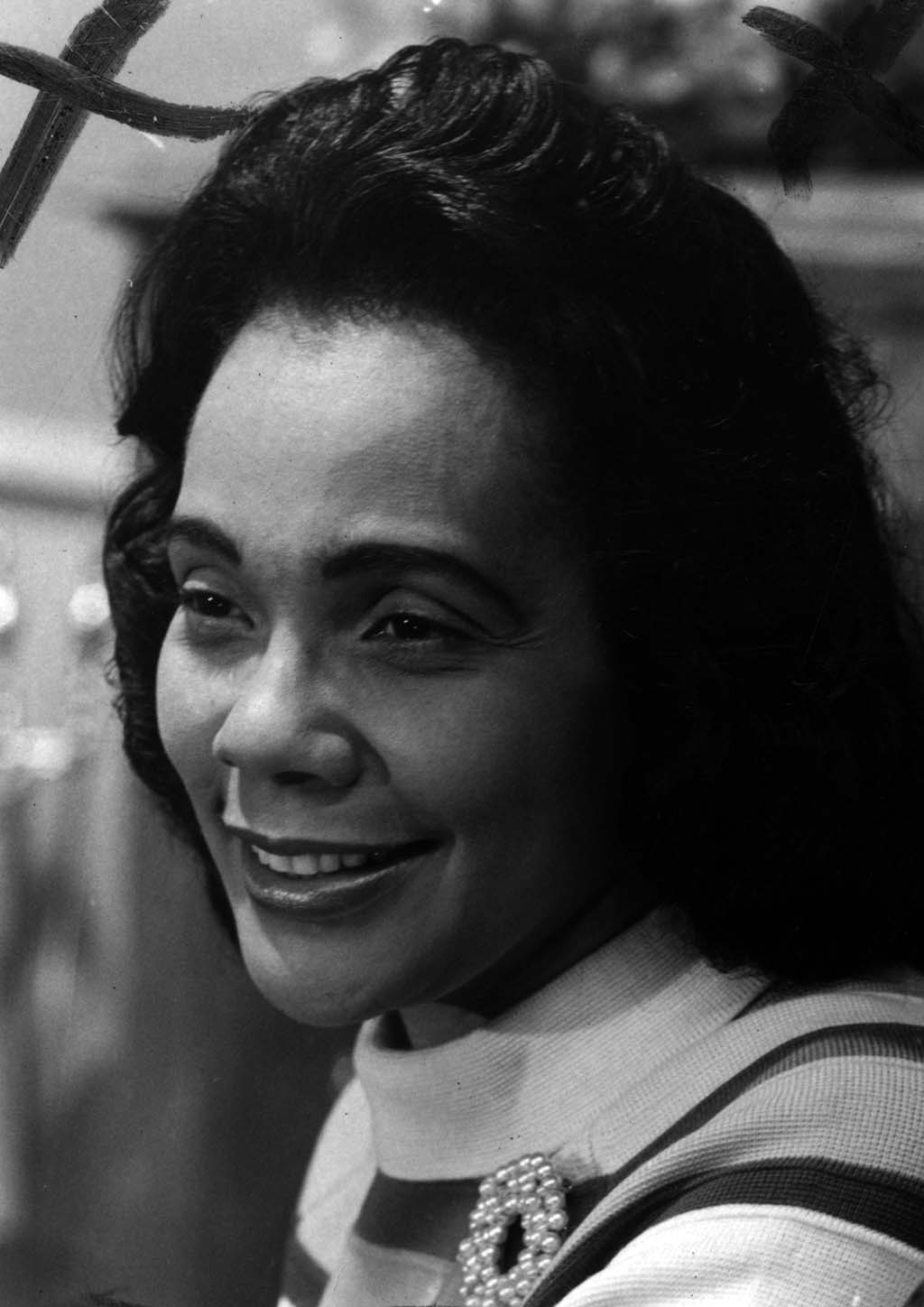 The widow of civil rights activist Martin Luther King Jr., Coretta Scott King became a forceful public figure and important leader in the civil rights movement. She made numerous contributions to the struggle for social justice and human rights throughout her life.

Coretta Scott was born the second of three children to Obadiah Scott and Bernice McMurray Scott in Heiberger, Alabama on April 27, 1927.  She spent her childhood nearby on a farm owned by her family since the Civil War.  During the Depression, Coretta and her siblings picked cotton in order to help support the family. This appeared to be the beginning of her determination to further her education.

After graduating at the top of her high school class in 1945, Scott enrolled at Antioch College in Yellow Springs, Ohio. Although Antioch was historically a white campus, Scott’s older sister had become the first fulltime black student to live on campus, and following in her footsteps, she majored in education and music. During her college years Scott faced racial discrimination when the Yellow Springs School Board refused to let her teach in a nearby elementary school. This incident ended her dreams of becoming a teacher.  Instead in 1949 she applied to and was accepted by the New England Conservatory of Music in Boston, Massachusetts. It was while attending the conservatory that she met Martin Luther King Jr., also a graduate student in Boston at that time.

Coretta Scott and Martin Luther King Jr. married on June 18, 1953.  The following year they moved to Montgomery, Alabama where Martin Luther King Jr. began his work as a minister at the Dexter Avenue Baptist Church. In 1955 Dr. King led the Montgomery bus boycott which initiated a new era of civil rights agitation. By marrying a man committed to civil rights, Coretta Scott King became an activist in her own right, sharing her husband’s work, walking beside him in marches, traveling with him to give speeches or giving them herself when he was unable to do so. She also began to develop her own reputation in social activism when she joined the Women’s Strike for Peace, a group formed in 1961 to support a ban on nuclear testing.  King was also a delegate to the World Disarmament Conference in Geneva in 1962.  By this point Coretta and Martin Luther King Jr. had four children.

When Martin Luther King Jr. was assassinated in Memphis, Tennessee in 1968, Coretta King was thrust into the national spotlight.  She calmed local and national racial tensions by exuding quiet dignity and courage at his public funeral in Atlanta.  Then just four days after his death, Coretta Scott King led a march of fifty thousand people through the streets of Memphis.

In 1969 Coretta King announced plans to establish the Martin Luther King Jr. Center for Non-Violent Social Change in Atlanta, Georgia. The King Center is now the official memorial dedicated to the advancement of the legacy and ideas of Dr. King. She also led a 17-year national campaign to establish Dr. King’s birthday as a national holiday.  She finally succeeded in 1986 when President Ronald Reagan signed the proclamation. Coretta King was also involved in the anti-apartheid campaign of the 1980s.  By the late 1990s she became an activist for HIV/AIDS prevention and a supporter of lesbian and gay rights.

Coretta Scott King suffered a stroke and heart attack in 2005.  Never fully recovering, she passed away on January 20, 2006 at a rehabilitation center in Mexico.