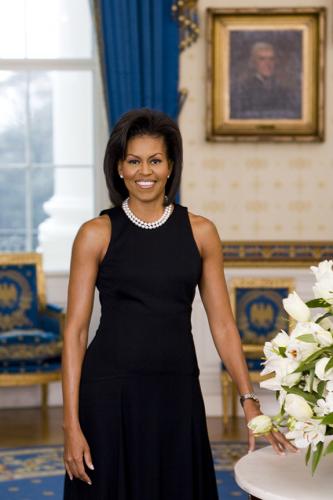 On January 20, 2009, with the Presidential swearing in of her husband Barack Obama, Michelle Robinson Obama became the first person of African American descent to become First Lady of the United States.

Obama is an accomplished professional with an impressive resume of her own. Outspoken, intelligent, and articulate, she can give passionate speeches, displaying warmth, charisma, and her ability to build an empathetic relationship with her audience. Early in her husband’s campaign for the Presidency, her forthright style sometimes resulted in “sound bites” which when taken out of context became controversial.

Born January 17, 1964 to Frasier Robinson, a pump operator for the city of Chicago’s water plant, and Marian Robinson, who spent much of Michelle’s childhood a homemaker, Michelle grew up on Chicago, Illinois‘ South Side, one of the nation’s poorest urban communities. Her parents strictly limited their children’s television viewing, and Michelle and her brother Craig were expected to take part in discussions around the family dinner table.

Leaving the corporate law world in 1991, Michelle pursued a series of positions in public service, serving as assistant to the mayor of Chicago and as assistant commissioner of planning and development for the city of Chicago. In 1993, she became founding Executive Director of Public Allies-Chicago, a leadership training program helping young adults develop skills for future careers in the public sector.

Since 1996, she has been associated with the University of Chicago, first as associate dean of student services, and in 2005 becoming vice president for community and external affairs at the University of Chicago’s Medical Center, as well as managing the business diversity program. She has worked to bridge the gap between the University and the residents of the surrounding disadvantaged neighborhood, focusing on the opening of neighborhood medical clinics. In January 2008 she took a leave of absence to concentrate on the demands of the Presidential race of her husband.

Barack Obama and Michelle were married in October 1992, and have two young daughters, Malia and Natasha (called Sasha). Michelle gives credit to her mother as her role model—paying respect to their differing choices as homemaker and career professional—and it is her widowed mother who has shared caring for the Obama children while Michelle and her husband have pursued their careers. The Obama marriage has been described by friends and observers as one of best friends and confidants. The President refers to her as “my rock.”

Model-tall (5’11”) and stylish—described by some as a one-person resurrection for American fashion designers—as well as a successful mother, wife, and professional, Michelle was named in Essence magazine in May 2006 as one of “25 of the World’s Most Inspiring Women.” Oprah Winfrey included her as one of the “young uns” honored at Winfrey’s 2006 Legends Ball.  She has described herself as “too impatient” for a political career of her own, but with her husband’s Presidency, her intelligence, wit, and passion have a national if not worldwide platform.