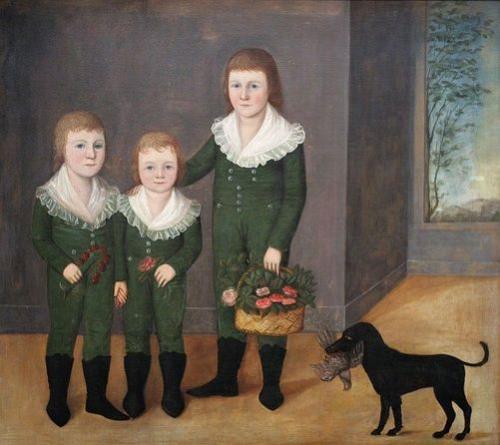 Joshua Johnston, also known as Joshua Johnson, was a portraitist active in Baltimore, Maryland between 1790 and 1825, and the first African American to gain recognition as an artist. Primarily a painter of members of the slave-holding aristocracy, he was rediscovered by Baltimore genealogist and art historian J. Hall Pleasants in 1939.

According to Baltimore County court chattel records, Johnston was the son of a white man, George Johnston, and an unknown enslaved black woman owned by William Wheeler Sr., a small farmer. Wheeler sold Joshua Johnston to George Johnston in 1764 for 25 pounds, half the price of an adult male field slave. George Johnston arranged that Joshua would be freed after completing a blacksmith apprenticeship, or on turning 21, whichever came first; Joshua would go on to complete his apprenticeship with William Forepaugh, and was freed on July 15, 1782. Between 1796 and 1824, he was listed in most Baltimore City directories as a painter or limner.  In the 1817-1818 directory he was also recorded as a “Free Householder of Color.”

Johnston was light-skinned and was easily mistaken for white, which may explain why some of his subjects at the time did not note his race. He advertised himself in the Baltimore Intelligencer as a “self-taught genius” who had “experienced many insuperable obstacles in the pursuit of his studies.” There is no record of him being formally trained as an artist. He moved often within Baltimore, but as a free man was able to spend some time outside the city.  For example, he is generally believed to have painted a portrait of Sarah Ogden Gustin in Berkeley Springs, West Virginia at some point between 1798 and 1802. Johnston may have supplemented his income by decorating furniture.

Of the thirteen existent paintings identified as his, many are of white children belonging to wealthy local families.  He also painted black subjects, including Daniel Coker, a founder of the African Methodist Episcopal Church. Johnston’s work is characterized by a rigidity of the arms and legs, indicative of the posed nature of his portraits. The works have a two dimensionality and the facial features are frequently vacant and staring. The backgrounds are notable for their detailed depictions of furniture or other props.  Johnston’s work has often been associated with Baltimore artists Charles Willson Peale, Charles Peale Polk, and Rembrandt Peale and he was assumed to have been apprenticed to or enslaved by the family but there is no evidence of this connection. It is likely that the generic similarity to these artists is indicative of the type of American folk art created during that era.  Joshua Johnston died in Baltimore in 1832.