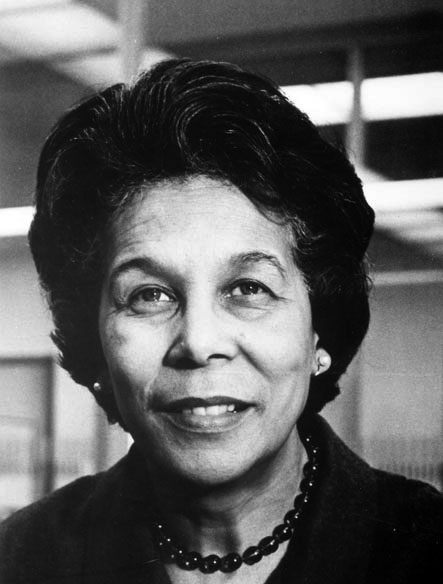 Born in St. Louis, Missouri on May 14, 1913, Jones was the daughter of Ralph Stanton, an insurance supervisor, and Etta James Stanton, a teacher. Jones attended public school in St. Louis and loved to read as a child. When a family friend suggested she become a librarian, Jones said the career had not occurred to her because she had never seen a black librarian.

Jones enrolled in Milwaukee State Teachers College (now the University of Wisconsin-Milwaukee) in 1929. After a year she transferred to Spelman College in Atlanta, where she studied for two years until tuition money ran out. She found a mentor while working at the Atlanta University Library, and she was encouraged to pursue a career as a librarian. Jones returned to Spelman and graduated with a B.A. in English and history in 1934. Four years later, she received a B.A. degree in library science from the University of Michigan. That year she married Albert Jones, a social worker living in New Orleans. They had three children.

Jones began her career as the reference librarian at Dillard University in New Orleans. In 1940, she became associate librarian at Southern University in Baton Rouge, Louisiana. She held that post until 1944 when the Jones family moved to Detroit, Michigan, where she began a 34-year career with the Detroit Public Library. When she arrived, Jones was the third black librarian to be hired in a city. During her years as a public librarian, Jones was instrumental in the development of library branches and pioneered outreach programming that encouraged inner-city residents to use library facilities.

In 1970, amid controversy, she was nominated to be director of the city’s library system. Jones said many people who had been her friends turned a “cold shoulder” to her. A group circulated petitions attacking her qualifications, and newspapers ran biased articles about her. Two library board members and the acting director resigned in protest to the appointment, but Jones had the support of a coalition of community leaders who were committed to the advancement of people of color. Upon her appointment, she became the system’s first female director and its first African American director, a position she held for eight years.

In 1976, Jones became the first African American president of the American Library Association (ALA). After being defeated for the position in the 1974 elections, Jones was asked to complete the term of the reigning president who had died suddenly. Jones was elected to a one-year term, from 1976 to 1977. Through the ALA she advocated for complete access to library services as well as outreach services to the disadvantaged.

After retiring in 1978, Clara Stanton Jones and her husband moved to Oakland, California. Appointed by Pres. Jimmy Carter, she served on the National Commission on Libraries and Information Science from 1978 to 1982. In 2007, Jones’ children established the Albert D. and Clara Stanton Jones Scholarship at the University of Michigan for students pursuing master’s degrees in the School of Information. Jones passed away on September 30, 2012 in Oakland. She was survived by her three children, seven grandchildren, and seven great-grandchildren. In 2018, she was posthumously inducted into the Michigan Women’s Hall of Fame.