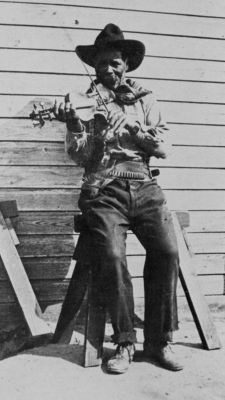 Jim Perry was an African American cowboy and top hand, the highest-ranked cowboy, on the three million-acre XIT Ranch near Dalhart, Texas. Perry established himself as an expert roper, rider, bronc buster, cook and musician.

Perry was born on February 2, 1858, in Texas. Very little is known about his early life. Since his teens in the 1870s he worked for the Horse Shoe T Cross Ranch before joining the XIT, which was up and running by 1885. Perry helped string over seven hundred miles of barbed wire fencing along the entire XIT Ranch property by 1887 making it the largest fenced ranch in the world.

Jim Perry was regarded as such an accomplished steer roper. In his later years Perry was revered for his culinary skills as a ranch house and chuck wagon cook for the XIT. He was also quite renowned as a top fiddler, which added to his likeability for he was loved and revered by his peers.

Perry remained a loyal employee of the XIT Ranch for two decades despite the fact that his race precluded him from becoming of one of the ranch’s foremen, a position for which he was well qualified. On September 29, 1908 he married Emma Beaseley. The couple had no children.  In 1918 Jim Perry died in Oldham County, Texas from a brain tumor.