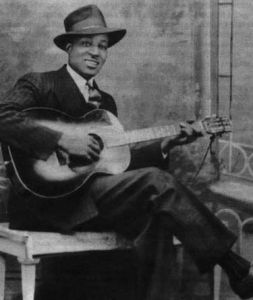 Although he struggled throughout his life to produce a sufficient income, Big Bill Broonzy played an integral role in launching the global popularity of Southern blues.  Born to sharecropper parents on June 26, 1893 in Scott, Mississippi, Broonzy grew up in Mississippi and Arkansas.  As a child he experimented with homemade guitars and fiddles and by the age of 15 proved he was skilled enough to play at special occasions.  During the next five years he mastered his unique vocal techniques and guitar skills that would assist him in his career which began after a stint in the U.S. Army in World War I.

In 1920 Broonzy moved to Chicago to work as a professional musician. He had some luck landing live performances for mostly black crowds at Chicago nightclubs.  In 1926 he made his first recording with Paramount Records, playing backup guitar for local blues artists Cripple Clarence Lofton and Bumble Bee Slim.  By the early 1930s Broonzy was finally given the opportunity to record under his own name for the Melotone, Oriole, and Champion labels.  By the end of the decade he was the top selling male blues vocalist on the Perfect and Vocalion labels and established the widely known Bluebird Beat Chicago Blues sound while recording with the Bluebird label.  By this time Broonzy was no longer a solo performer.  He began to play with small groups that incorporated the piano, trumpet, saxophone, and sometimes a rhythm section.

By 1945 black musical tastes were moving away from the blues toward jazz and popular music. Broonzy however found and exploited the growing interest of whites in blues.  By the late 1940s a new generation of white blues lovers praised him for his spectacular performances with fellow blues and folk musicians Brownie McGhee, Pete Seeger, and Sonny Terry.  In 1951 his popularity reached Europe when at the age of 58 he performed blues music at the London Jazz Club.  He returned the next year to perform with Mahalia Jackson and continued to make appearances in England in 1955 and 1957 as well as in Africa, South America, and Southeast Asia.

After years of supporting himself through various forms of work, Broonzy finally made enough money in 1953 to focus solely on his music.  Two years later he wrote his autobiography.  In 1957 a lung operation shortened his recording and performing career.  Big Bill Broonzy  died from cancer in Chicago on August 15, 1958 at the age of 65.