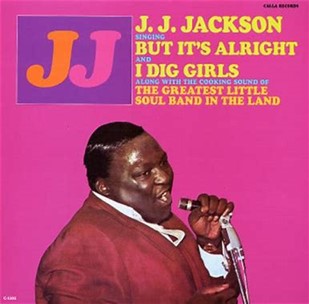 Hear a soundtrack specially chosen to enhance your learning about J.J. Jackson (1942- )

Composer, arranger, pianist, lyricist J.J. Jackson was born Jerome Louis Jackson on November 8, 1942, in Brooklyn, New York. However, most of his life was spent living in the Bronx. While there is little information on his formative years, he was an ingenious celebrated belter singer known for his aggressive melodious sound. He was also a stellar musician and entertainer who played various instruments with most of his compositions.

In 1958, at the age of 16, Jackson composed and wrote the lyrics for “The Lord Will Understand.” In 1963, Jackson he released his first singles, “Shy Guy” and “Time” on Crescent Records.

In 1966, Jackson was encouraged by his manager to move to London, England. He accepted the advice quickly stormed the British music and dance industries with his hit singles “But It’s Alright,” on the black-owned Calla Records label, and “Boogaloo Baby” produced by Concert House Productions. “Boogaloo Baby” was presented as the designated A-side of the record, but within a week of release, Calla was promoting “But It’s Alright.” The song peaked at #3 on Billboard Hot 100, and at #22 on the Billboard Pop chart. During the same year )1966), Jackson also wrote a hit single for the British group, Pretty Things which was titled “Come See Me“ which peaked at #43 on the U.K. chart.

In 1967, Jackson released “Four Walls-Three Windows and Two Doors,” an R&B Single that peaked at #17 on the R&B chart, and “I Dig Girls” which peaked at #19 on the R&B charts. Although he produced and released “Sho Nuff Got A Good Thing Going,” “Try Me,” and “It Seems Like I’ve Been Here Before” all in 1967 and “Come See Me, I’m Your Man” and “I Don’t Want To Live My Life Alone” in 1968, none of which charted, his career was rapidly declining.

By 1969, Jackson, still residing in London, was now known as an arranger.  He worked with the U.S. blues singer Jimmy Witherspoon, jazz artist,  Eugene “Jack McDuff” McDuffy, and the British all-girl group, the Shangri-Las who produced that year their hit single, “It’s Easier to Cry.”

Jackson released his first album in 1970 while in England called The Great J.J. Jackson, on the Warner Brothers label. Two other album came quickly that year,  The Greatest Little Soul Band in the Land on the Congress Records label, and J.J. Jackson’s Dilemma with Perception Records. None of the albums charted.  In 1975 Jackson recorded the single “Let Me Try Again” on the Kasenetz-Katz Magna-Glide label. It peaked at #45 on Billboard charts but it was also It was his last recording in the United States. Jackson continued performing and on occasion played with Latino guitarist Chris Montanez and legendary Pop singer Chuck Berry.

In 1980 Jackson moved to São Paulo, Brasil, where he released the single “Out of Common” following in 1981 “To My Hearth.” In 1985 Jackson returned to the United States and faded into obscurity in Palmdale, California. He turned 78 in 2020.