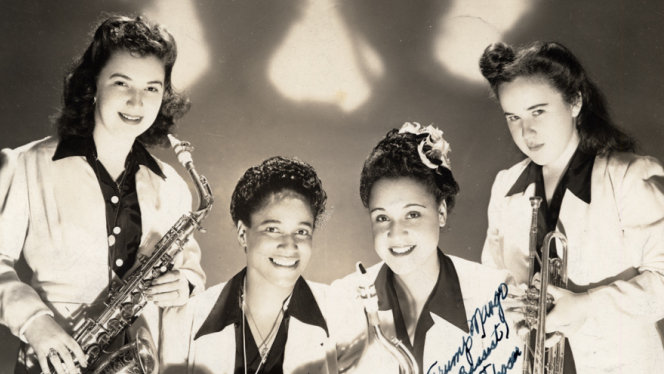 The International Sweethearts of Rhythm was an interracial, all-female jazz band active for 12 years, from 1937 to 1949.  The band began at the Piney Woods Country Life School, established in 1909 to train black children in central Mississippi.  The original members of the Sweethearts were all students, who were African American or mixed raced, during the 1930s.  In 1943, two white women joined the ensemble, making it an interracial band performing in the Deep South during Jim Crow.  Their challenge of racial custom and law was compounded by the fact that the mixed-race member of the band was light enough to “pass” for white.

An interracial band violated both laws and customs in Mississippi and across the South.  As a result, the members of the band faced constant harassment from law enforcement agencies.  In fact, the band faced scrutiny from both whites and African Americans.  White segregationists were disturbed by the group’s challenge to the social and cultural norms that required the races remain separate.  African Americans feared retribution from white political and economic elites if they were identified as supporting the band. In order to navigate this racial divide, the band added “international” to its name.  Labeling themselves as international provided the group a social space that allowed the band to rest somewhat outside the Southern racial structure.

Despite their challenges to racial segregation, the group for a time developed a loyal following among many high school and college age African Americans.  As graduates of the Piney Woods School, the band members embodied the ideals of racial uplift through education, a concept that appealed to growing numbers of black Southern youth.  Ironically, the International Sweethearts gained a strong following precisely because racial segregation led to a series of small, segregated clubs and theaters across the South that provided opportunities to perform. This black theater and club network, known as the Chitlin’ Circuit, provided steady jobs and income for the Sweethearts. The Sweethearts also gained an international audience when they spent time entertaining African American troops stationed in Europe for the USO.

The International Sweethearts of Rhythm’s fame decreased in the late 1940s as musical tastes in the African American community changed.  Rhythm and Blues increasingly replaced jazz as the major popular music among the young people who had previously been the Sweetheart’s audience.  The group had a brief resurgence in popularity during the Women’s Liberation Movement of the 1960s and 1970s.  Even in the 1970s, they remained one of a handful of racially integrated all-female bands.  As such they became popular with a new generation of black and white women who saw them as symbols of success in an era of blatant racism and sexism.