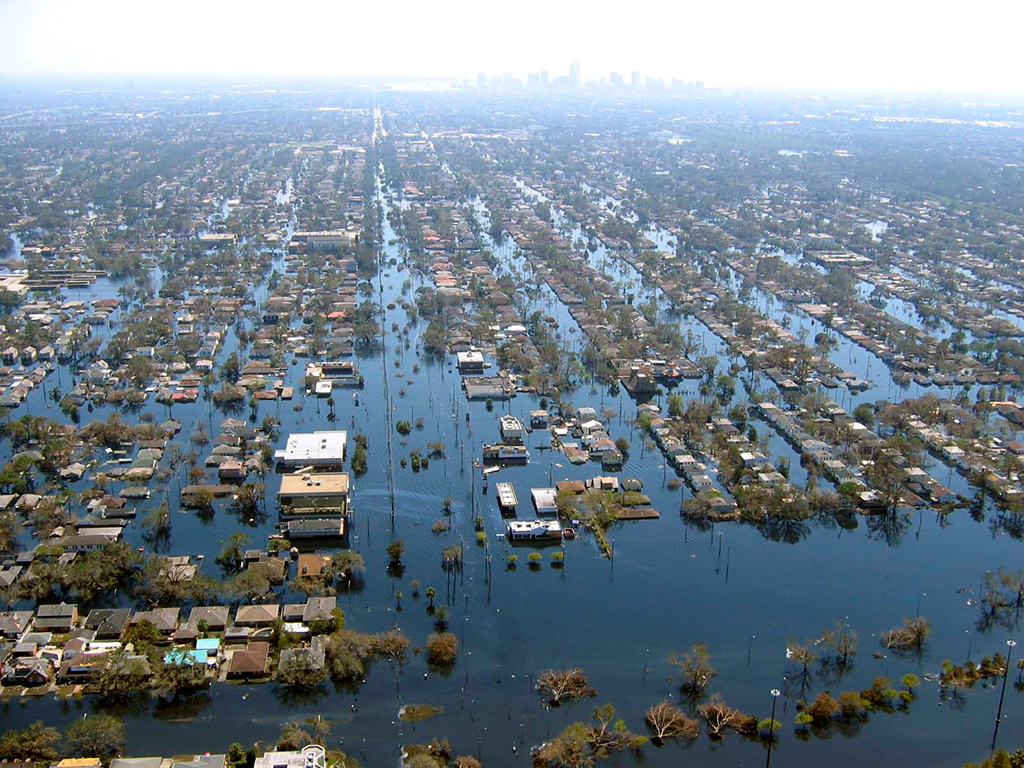 Hurricane Katrina began as a Category 1 hurricane in Florida, before striking the Gulf Coast on August 29, 2005. By the time Katrina had run its course, more than 1,700 people were killed and hundreds of thousands of others displaced. Causing billions of dollars of damage, Hurricane Katrina ranks as one of the costliest storms in American history. The damage took place in Florida, Louisiana, Mississippi, and Alabama.

On Monday, August 29, Katrina made landfall in Plaquemines Parish, Louisiana as a Category 3 hurricane backed by 145-mile-an-hour winds. From there, Katrina pounded New Orleans, as water poured over the levees and eventually they were breached. By the afternoon, parts of New Orleans’ Lower Ninth Ward were inundated by floodwaters of up to 12 feet, rising to the rooftops. By Wednesday, August 31, the flood waters had crested with parts of the city under as much as 20 feet of water.

Thousands of New Orleans residents remained stranded in their houses and on rooftops waiting for help. Others made their way to the Superdome and the Convention Center, both of which became the main evacuee centers, along with the Interstate-10 expressway and the Louis Armstrong International Airport.

Amidst the disorder and panic, rescuers worked to save those who were still trapped. While thousands of evacuees started dispersing from New Orleans and heading to other Southern cities and beyond, the pandemonium in New Orleans lasted for days. Reports of looting, rape, and suicide – many of the stories unverified – filled the airwaves. Eventually, order was restored, as the National Guard and other government agencies stepped in to coordinate the relief efforts.

Overwhelmed by the disaster, the Federal Emergency Management Agency (FEMA) was slow to respond, drawing outrage from all sides. A congressional investigation completed in 2006 concluded that although the National Weather Service and the National Hurricane Center provided highly detailed forecasts and adequate warning, all levels of government warranted criticism, in terms of their preparation for and response to Hurricane Katrina. While massive damage had impaired communications systems, agencies like FEMA, the Department of Homeland Security, the National Guard, and the Coast Guard were all criticized for their lack of preparation and coordination. The New Orleans Police Department (NOPD) was singled out as being remarkably ineffective. Investigations and trials are ongoing after several members of the NOPD were accused of killing unarmed, innocent civilians in the aftermath of Katrina. U.S. president George W. Bush also received criticism for his handling of the disaster with many claiming that his response was slow and minimal, given the level of tragedy.

The situation in New Orleans overshadowed the damage caused by Hurricane Katrina in other areas of the Gulf Coast. In Mississippi, thousands of homes were destroyed by high winds and tornadoes. As many as 66,000 Mississippians were displaced from their homes. Although Alabama avoided a direct hit from Katrina, more than 1,000 residents saw their homes destroyed.

The rebuilding process in New Orleans and other Gulf Coast cities has been slow. Some former residents have returned, while others have chosen not to return or have been unable to return. While parts of New Orleans have been rebuilt, some neighborhoods, such as the Lower Ninth Ward, remain largely untouched since the tragedy.

In November 2009, a federal judge ruled that poor maintenance of a major navigation channel by the Army Corps of Engineers led to some of the worst flooding after the hurricane. Although the ruling represented the first time that a specific government agency had been held liable for Hurricane Katrina flooding, the judge limited the liability to damage around the Lower Ninth Ward and St. Bernard Parish, east of the city.