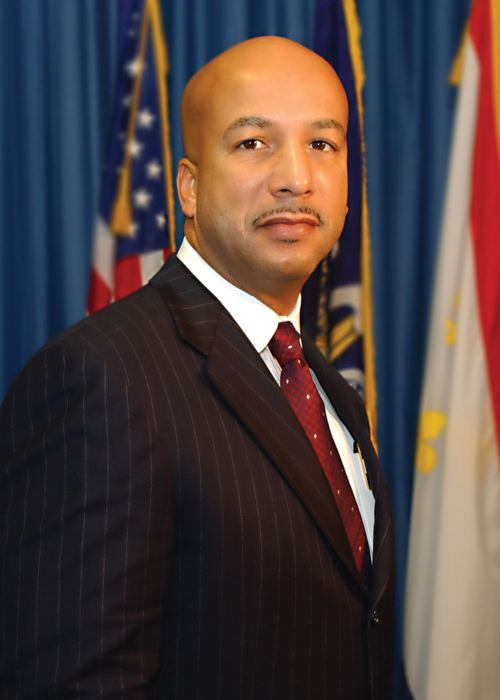 Clarence Ray Nagin, Jr., the mayor of New Orleans during Hurricane Katrina, was born June 11, 1956 at Charity Hospital in the city.  His father worked three jobs in order to support the family, starting his days as a fabric cutter at a factory and then dividing his evenings between his jobs as a janitor at City Hall and a mechanic at a dairy company. His mother managed the lunch counter at K-Mart. They had three children, including Ray and his two sisters.

Nagin grew up in New Orleans’ 7th Ward, and then moved to Tremé and later Algiers, the last move coming when he was a young teenager. After graduating from O. Perry Walker High School, he earned a baseball scholarship to the Tuskegee Institute in Alabama. After earning a degree in accounting from Tuskegee in 1978, Nagin took his first job with General Motors, working in the purchasing department in Detroit. From there, he went on to work in Los Angeles, before taking a job in Dallas in 1981.

In 1982, Nagin married the former Seletha Smith in Dallas. The couple has three children.  He returned home to New Orleans in 1985, accepting a position as controller for Cox New Orleans, the city’s only cable television franchise. In 1989, he became a corporate manager for Cox New Orleans, receiving accolades for revamping the struggling company.

Nagin made the transition to politics, running for mayor of New Orleans in 2002. Seen by many as a political neophyte, Nagin ran a campaign promising to put an end to corruption. He surprisingly finished first among 15 candidates in the mayoral primary and then easily won a runoff against Police Superintendent Richard Pennington. In May 2002, Nagin succeeded Marc Morial to become the fourth African American mayor of New Orleans. Shortly after taking office, Nagin launched highly-publicized corruption raids, arresting city officials including members of the Taxicab Bureau and the director of the Utilities Department.

Nagin entered the international spotlight for his handling of Hurricane Katrina, the August 2005 storm which devastated the city.  The storm caused the levees to break, flooding most of New Orleans and killing more than 1,000 city residents.  Nagin drew sharp criticism for issuing a mandatory evacuation notice only 19 hours before Katrina struck and also came under fire for the erratic way in which some city agencies responded to the crisis. Nagin in turn pointed the finger at federal authorities for what he saw as a delayed and inadequate response to the disaster.

In spite of being a controversial figure in the aftermath of Hurricane Katrina, Nagin finished first in the 2006 mayoral primary and would later beat out Lieutenant Governor Mitch Landrieu in a runoff. He served as mayor during the initial years of the post-Katrina recovery and rebuilding process until Landrieu defeated him four years later and took office in May of 2010.