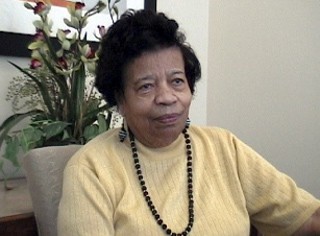 Dorothy Hollingsworth
Fair use image
This entry is sponsored by The Roosevelt Alumni for Racial Equity (RARE) to acknowledge this individual’s commitment to our goals of promoting racial equity in public and private schools across the nation.

Dorothy Hollingsworth, a prominent educator and politician, achieved a number of “firsts” during her years in Seattle. The most important was becoming the first Black woman in Washington State’s history to serve on a school board. Born in Bishopville, South Carolina on October 29, 1920, Hollingsworth moved at an early age to Winston-Salem, North Carolina. She later attended Paine College, graduating in 1941. After teaching in South Carolina and then in North Carolina during World War II, she moved to Seattle in 1946 with her husband, Raft Hollingsworth.

Soon after her arrival Hollingsworth became active in the Madison Branch of the Seattle YWCA, First A.M.E. Church, the National Association for the Advancement of Colored People (NAACP), and her sorority, Delta Sigma Theta, Inc. Denied a position as a teacher in Seattle Public Schools in 1949, Hollingsworth became an investigator for the state Department of Welfare. She received a master’s degree in social work in 1959 from the University of Washington. Soon after, she became a social worker in Seattle Public schools.

In the early 1960s, Hollingsworth became involved with the local civil rights movement, protesting restrictive covenants and championing open housing initiatives throughout the city. In 1965, she became the first African American woman to manage a major city agency when she was selected by the Seattle School District as the director of the Head Start Program. That program, part of President Lyndon Johnson’s Great Society national anti-poverty initiative, was the first Head Start program in the state of Washington.  Hollingsworth established, organized, and implemented the program according to the federal guidelines from 1965 to 1969.  Her high visibility in this post led the National Director of Head Start to appoint her in 1966 to the national advisory board of Sesame Street, the Public Broadcasting Service (PBS) children’s TV program.

From 1969 to 1971, Hollingsworth served as Deputy Director for Planning for the Model Cities Program, another Great Society initiative designed to fight urban poverty. She became Associate Director of Project Planning a year later, and according to the Seattle Times, became with that appointment the highest paid female employee in city government. Hollingsworth oversaw 46 separate projects in education, arts and culture, economic development, job training, health, welfare, and legal services. When the program ended in 1975, she became director of Early Childhood Education where she set up daycare programs and facilities for children throughout the city.

In the same year, Hollingsworth launched a successful campaign to become the first Black woman elected to the Seattle School Board in its 93-year history. She joined the first female majority on the School Board and served there until 1981. Hollingsworth’s tenure was controversial. Her election allowed the Black community to have a voice in their children’s educational futures but Hollingsworth favored a contentious program of school busing to promote racial integration and thus drew intense criticism from a number of Black, white, and Asian activist groups opposed to busing.

In the early 1980s, Hollingsworth worked as Deputy Director for the Department of Human Resources for the City of Seattle. She then was elected to the State Board of Education as the representative from the 7th District, serving from 1984 until her retirement in 1993.

Hollingsworth has received numerous awards and accolades throughout her lifetime. Today, a Head Start program, administered by the First A.M.E. Church, bears her name.