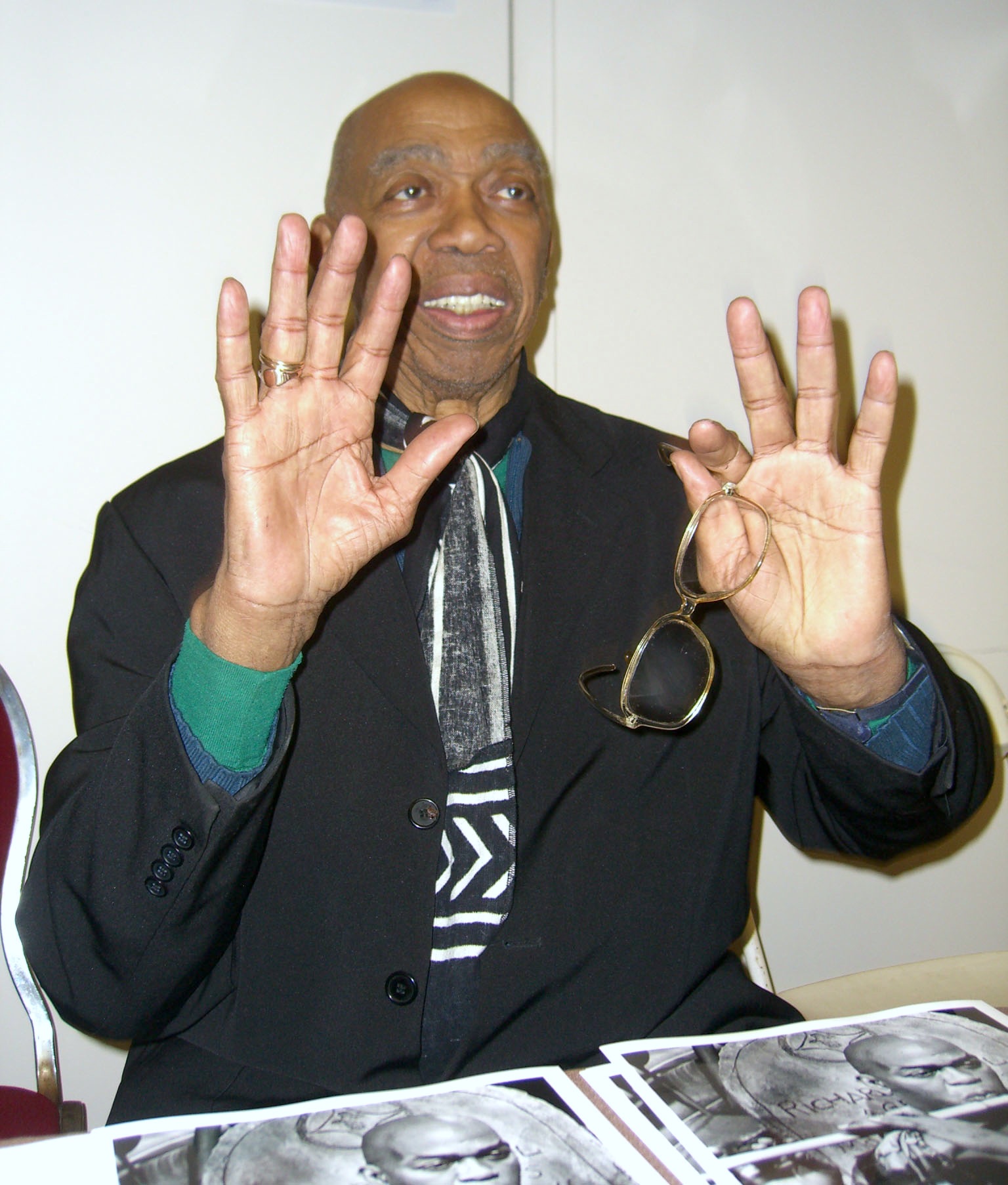 Geoffrey Lamont Holder, acclaimed choreographer and legendary figure in the dance world, was also a respected actor, Tony Award-winning director, costume designer, singer, music composer, voice-over artist, orator, painter, sculptor, and photographer.  Holder was born to a middle-class family in Port of Spain, Trinidad and Tobago, on August 1, 1930.  His parents, Arthur Holder, a salesman, and Louise de Frense Holder, encouraged the artistic interests of each of their five children.  Holder’s siblings were Arthur (known as “Boscoe”), Jean, Marjorie, and Kenneth.

Despite the fact that money was tight during the Great Depression, Holder’s father bought the children a piano.  Older brother Boscoe, a musician, artist, and dancer, taught the younger Holder to paint and to dance. At age seven Holder joined Boscoe’s folkloric dance troupe, the Holder Dancing Company.

Holder attended Trinidad’s elite secondary school, Queen’s Royal College, but struggled with dyslexia and a tendency to stammer. It was as a budding creative dancer, choreographer, and painter, however, where Holder excelled. When Boscoe left Trinidad for England in the late 1940s, Holder became the director and lead performer of the dance company Boscoe founded.  During this time, Holder also began establishing himself as a popular young painter in Trinidad.

In 1952, choreographer Agnes de Mille happened to catch a performance by Holder’s dance group in St. Thomas, U.S. Virgin Islands.  De Mille met Holder and encouraged him to move to New York.  In 1954 Holder sold 20 of his paintings in order to pay for the Holder Dancing Company’s passage to New York.

In order to support himself in New York, Holder taught classes at the Katherine Dunham Company. The 6’ 6” Holder caught the attention of theatrical producer Arnold Saint Subber, who invited him to play a Haitian character named Samedi in the 1954 Harold Arlen musical House of Flowers, based on a Truman Capote short story.  Among the cast members were Diahann Carroll and Pearl Bailey, and it was on the set of House of Flowers that Holder met dancer Carmen de Lavallade, whom he married in 1955.  In 1955 Holder joined the Metropolitan Opera Ballet as a principal dancer, and in the next few years he choreographed for many other dance companies. In 1957, the same year Holder got a prestigious Guggenheim Fellowship in painting, he starred in an all-black production of Waiting for Godot.  It was also in 1957 that son Leo Anthony Lamont Holder was born.  Through 1960 Holder also continued to appear with his own dance troupe, now renamed Geoffrey Holder and Company.

Holder’s first film role was in the movie All Night Long in 1962.  Holder also appeared in television productions and other movies including Doctor Doolittle in 1967, Woody Allen’s Everything You Always Wanted to Know About Sex * But Were Afraid to Ask in 1972, Live and Let Die in 1973, and Annie in 1982.

For over 70 years Holder was involved in a variety of art forms, including writing a book on folklore and another one on Caribbean cuisine. The unifying element in most of Holder’s multifaceted works was the illumination of combined African and European themes.

Geoffrey Lamont Holder died in Manhattan of complications from pneumonia on October 5, 2014.  He was 84 years old.