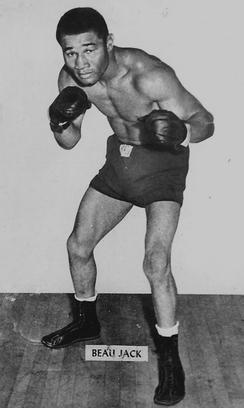 Sidney Walker, world champion boxer in world light heavyweight class, was born in Augusta, Georgia on April 1, 1921. He was raised by his grandmother, Evie Mixom, on her small farm near Augusta.

Walker quit school by the second grade to assist his grandmother on the farm and because if it, could neither read nor write for many years.  In 1929, at the age of eight, he started leaving home at 5:00 a.m. each day to walk the 3 ½ miles to Augusta to earn money shining shoes.

When he came home crying and told his grandmother that a boy had taken his shoe polish and money, she gave him no sympathy and told him he needed to learn how to stand up for himself. A week later, he whipped that boy in a fist fight.  When he proudly told his grandmother what he’d done, she considered him “reborn” and renamed him “Beau Jack.”

After other street battles, Beau Jack learned that he had a knack for fighting.  By the time he was twelve he was a veteran of battle royals, contests where six to ten boys, typically black, were blindfolded and put into a ring together. The last boy standing won the prize money collected from the spectators.

After one battle royal longtime Augusta National Club steward Bowman Milligan hired him young Beau Jack as a locker room attendant and soon he was shining the shoes of club members.  After his final battle royal, Beau was introduced to the club’s most famous member, golfing champion Bobby Jones. The latter put up $500 and convinced fifty other golfers to put up $50 each to help launch Beau’s boxing career.

Beau Jack turned professional in 1940 at the age of 19.  He fought 23 times that year, losing only three bouts and became an instant fan favorite as a result of his non-stop punching style. His continued success and crowd pleasing performances over the next two years led to an opportunity to fight Tippy Larkin in Madison Square Garden on December 12, 1942 for the New York State Athletic Commission version of the world lightweight title.

Jack knocked Larkin out in the third round to capture the title. He lost it to Bob Montgomery in May of 1943, but then regained it that November with a unanimous decision victory over Montgomery. He lost the title for good on March 3, 1944 but continued fighting until 1955.

From 1941 to 1949, Beau Jack appeared in Madison Square Garden 27 times; and was featured in the main event a record 21 times as a result of his enormous popularity. Over the course of his career, Beau fought many of the greatest lightweights and welterweights of his era including Fritzie Zivic, Henry Armstrong, Bob Montgomery, Sammy Angott, Johnny Bratton, Kid Gavilan and Lew Jenkins.

In retirement, he initially returned to Georgia where he grew vegetables and opened a drive-in restaurant while raising his family.  His Georgia business efforts failed and he moved to Miami, Florida in 1957 where he spent years shining shoes at a number of Miami Beach hotels.

Jack’s fortunes revived in the 1980s when he became the head trainer for the famous Fifth Street Gym in Miami Beach.