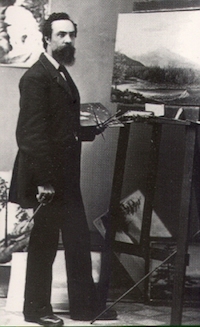 Grafton Tyler Brown, the most successful African American artist in the 19th Century west, lived his adult life as a white man.  This says more about America’s racial structure than it does about his choice to pass for white.  Brown was born on February 22, 1841 in Harrisburg, Pennsylvania to light-skinned Thomas and Wilhelmina Brown, the first of four sons.

In 1858, Grafton Brown arrived in Sacramento, California, where he worked as a hotel steward. One year later, the widely-read Sacramento Union noticed a “Good Painting,” Grafton Brown’s depiction of the British steamship Great Eastern. The next year, judges at the State Agricultural Fair praised Brown’s “inborn and self-taught style” that produced a “nicely drawn” railroad engine.

Encouraged by this early recognition, Brown moved to San Francisco where he failed to indicate that he was “colored.” Here, his work came to the attention of Charles Kuchel, formerly the foremost lithographer during the 1850s. Lithography is today known as “offset printing;” Brown drew with a grease pen on polished limestone.

During the late 1860s Brown steadily built his business and reputation with work for the various California state agencies such as the Tide Land Commission where he produced huge maps.  This success was illustrated by more than 90 regional, mining, and real estate maps he produced between 1865 and 1878.

By 1871 Brown bought a steam press to expand his business and through the 1870s, increased his staff from four to eight.  Utilizing his artistic sense, Brown impressed San Francisco businesses with his bold, twisted lettering style, prompting many of them to shift their business to his company.  Brown designed and printed more than 80 mining stock certificates during this period, successfully competing with much larger San Francisco firms such as Britton & Rey.

An economic depression at the close of the 1870s along with the exhaustion of silver ore mining in Nevada ended Brown’s prosperity. In 1878 Brown sold out to his partner William T. Galloway, who reduced the staff by half. Brown then devoted himself to drawing views for Northern California county histories. He also developed a new skill, landscape painting.

From 1882 through 1891, Brown sketched or painted varied landscapes from British Columbia to Yellowstone National Park (Wyoming region).  He followed the Northern Pacific Railroad painting scenes in Victoria, B.C., Tacoma, Washington, Portland, Oregon, and Helena, Montana.  During the 1880s, Brown avidly advertised his work to tourists as he painted the high mountains of the northwest and the geysers, colored rock, and waterfalls of the nation’s first national park.

While in Portland between 1886 and 1887, Brown became Secretary of the Portland Art Club, the city’s first organization dedicated to the production and admiration of art.  In 1896 he married Albertine Espey, the Paris, France-born widow of the club’s treasurer, Edward Espey.

During his final years Brown worked a draftsman for the Army Corps of Engineers in St. Paul, Minnesota as well as for the city’s civil engineering department. Brown died in St. Paul on March 2, 1918 at the age of 77.  His death certificate listed him as “white.” He left no musings on his racial transformation; Grafton Tyler Brown focused his life almost exclusively on his art.