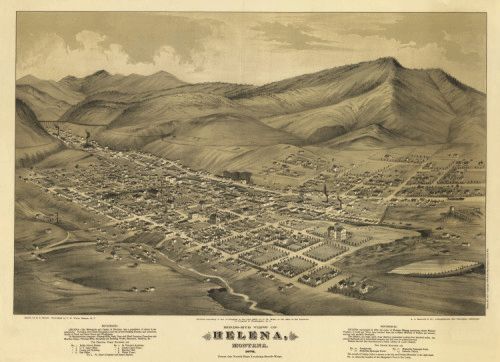 The Colored Citizen published weekly in Helena, Montana, for a little over two months during the electoral campaign season, September to November 1894. The paper proclaimed its purpose to become “the mouthpiece . . . to educate the public to a full appreciation of our [African Americans in Montana] worth, that we may be judged impartially.” The paper’s political purpose, however, was embedded in the raucous and brazen contest between Helena and Anaconda to become the new State of Montana’s permanent capital, the so-called “Capital Fight.” J.P. Ball, Jr., son of a photographer who had migrated to Helena from Cincinnati, Ohio, took on the position of editor. The Colored Citizen’s financing for the paper came from local boosters for Helena as the state capital, including the most vocal proponent, mining baron William A. Clark.

The Colored Citizen did its political bidding and blasted the Anaconda Copper Company’s control of its company town, Anaconda, suggesting that African Americans in Montana could not expect fair treatment if Anaconda became the state capital. Ball claimed that his paper’s editorials made the difference in the campaign by compelling African Americans statewide to vote for Helena. More important, The Colored Citizen did function as a “mouthpiece” for African Americans during its short existence. “We launch this venture with no enemies to punish,” Ball editorialized, “but very, very many friends to favor.”

J.P. Ball, Jr. pointed out during the Capital Fight that as long as African Americans confine themselves “to the groove of a menial” there are no complaints, but “if perchance he seeks the trades or professions for a livelihood, immediately his color arouses the antagonism of the masses.” In another editorial, he challenged all citizens to “beat down all kinds of prejudice, regardless of whether a nickel is lost or made.” He trumpeted his own father’s nomination for coroner in Helena by the Republican Party as evidence that the “color line had been broken,” and reason to select Helena as the state capital, which voters did in November 1894.