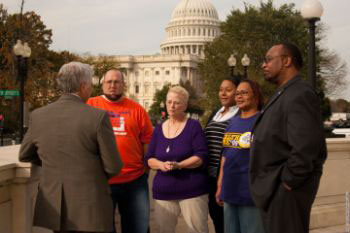 In the following article, American University political scientist James A. Thurber, a leading authority on presidential and congressional politics, describes the effort of President Barack Obama to change one part of the culture of Washington, the influence of lobbyists.  Candidate Obama made that reform a central part of his presidential campaign in 2008.  This article explores his effectiveness in making good that promise.

Widespread scandal and public opinion helped to fuel then Illinois Senator Barack Obama’s nonstop attack on the role of lobbyists in American politics and made him a leading ethics and lobbying reform advocate in the U.S. Senate in 2006 and 2007.  Obama continued that theme in his 2008 election campaign and in the first four years of his term as president, he attempted to change the culture of lobbying and influence in Congress and Washington.  Candidate Barack Obama in 2008 captured the anger with Congress, lobbying and the way Washington works when he made this promise to the public:

“I intend to tell the corporate lobbyists that their days of setting the agenda in Washington are over, that they had not funded my campaigns, and from my first day as president, I will launch the most sweeping ethics reform in U.S. history. We will make government more open, more accountable, and more responsive to the problems of the American people.”

These are not new questions for Washington; they echo James Madison’s lament in Federalist Paper Number 10 written in 1787.

“Complaints are everywhere heard from our most considerate and virtuous citizens, equally the friends of public and private faith, and of public and personal liberty, that our governments are too unstable, that the public good is disregarded in the conflicts of rival parties, and that measures are too often decided, not according to the rules of justice and the rights of the minor party, but by the superior force of an interested and overbearing majority. However anxiously we may wish that these complaints had no foundation, the evidence, of known facts will not permit us to deny that they are in some degree true.”

Although candidate Obama promised to change the way lobbyists influence Washington politics, as President he has found changing the lobbying industry difficult because of its size, adaptability, and integral part it plays in America’s pluralist democracy.  By official estimates, lobbying is the third-largest enterprise in our nation’s capital, after government and tourism. As of January 1, 2009, there were over 27,000 federal-registered lobbyists representing virtually every type of interest in America.  The number of registered lobbyists dropped precipitously in the first twelve months of the Obama administration to 14,000 and then to 8,000 in 2012.  However, the number of persons employed in Washington who are either lobbyists or are associated with all dimensions of the advocacy industry (registered and unregistered advocates and supporting institutions) has been estimated to be well over 100,000.

Spending by registered lobbyists increased 62 percent, from $2 billion in 2007 to $3.4 billion in 2012, but that is just the visible, registered activities. The $3.4 billion is just the tip of the lobbying expenditures iceberg, because it includes only what is recorded by registered lobbyists in public records. This astonishingly averages out to over $18 million in lobbying expenditures each day Congress was in session in 2012. This does not include money spent for other forms of lobbying such as grassroots organizing, coalition building, issue advertising on television, radio, and in the print media, support of think tanks, issue related survey research and advocacy on the Internet.  There are estimates that the total spent on lobbying is closer to $9 billion per year in Washington, about three times the officially reported amount. This growth occurred despite President Obama’s promise to change the culture of Washington.

The President used attacks on lobbyists as a way to help build support for his impressive policy agenda in 2009, especially in the battle over health care reform and major changes in financial regulation.  He used his executive power to restrict lobbyists from service in government and limit their access to policy making in the executive branch.  Immediately after he was sworn into office in January 2009, Obama directed his departments and agencies to avoid even the appearance of conflicts of interest (Executive Order No. 13490).

Lobbyists provide a variety of services such as general strategic advice, issue advocacy advertising, polling, and advice about media strategy, organize get-out-the-vote (GOTV) strategies, general tactical guidance for candidates, and many volunteers.  Ultimately, President Obama tried to limit the continuation of these identical services and tactics after elections and during major policy debates over his tax and spending agenda, climate change legislation, health care reform, financial regulatory reform, immigration policy, gun control and education policies. Lobbyists, however, have posed a major dilemma for President Obama; sometimes he likes them and other times he attacks them; sometimes he tries to stop them and other times he needs them.  They have become essential to his legislative strategy. By fighting lobbyists President Obama has found himself challenging an integral part of pluralist representative democracy in the United States.

President Obama used criticisms about the role of lobbyists and money in politics to his advantage in building support for health care reform and financial regulation reforms in 2009 and 2010 but he was later criticized for “selling out” to these special interests when compromises were necessary to pass those historic reforms.  For example, in a speech on the need for health care reform on March 19, 2010, he attacked health insurance lobbyists for stopping what he felt was in the public interest:

President Obama reiterated his criticisms of lobbyists in his State of the Union message on January 27, 2010 and pledged again to lead the effort to change the way they work in Washington:

“It’s time to require lobbyists to disclose each contact they make on behalf of a client with my administration or with Congress. It’s time to put strict limits on the contributions that lobbyists give to candidates for federal office. Each time lobbyists game the system or politicians tear each other down instead of lifting this country up, we lose faith. The more those TV pundits reduce serious debates to silly arguments and big issues into sound bites, our citizens turn away. No wonder there’s so much cynicism.”

However, he also publically praised his “stakeholders” (often federal registered lobbyists) from organizations like the AARP, the pharmaceutical industry, the American Hospital Association, the American Medical Association, and yes, the health insurance industry, in passing his historic health care reform legislation. What is the difference between lobbyists and non-registered stakeholder advocates (e.g. former Senator Tom Daschle)? Are both public advocates for his policies?

A federal registered lobbyist is defined in law and must report quarterly the details of their lobbying activities, clients, and money spent; fines and jail are possible for those who do not comply. Stakeholders and those giving strategic advice hire federal registered lobbyists in issue campaigns that are not held to legal standard; their activities and spending are not reported publically. Generally, their advocacy role is non-transparent.  With President Obama’s attacks on lobbyists have come a flood of de-registrations of federal registered lobbyists (declining from 27,000 to 14,000 in 2009 to an estimated 8,000 in 2012). At the same time, the non-registered stakeholder “advocates” have increased to approximately 90,000, which leads to less transparency of who is lobbying, for whom and what, and how much money is being spent on those advocacy activities.

In the four years of his administration, President Obama’s lobbying reforms and his effort to change the way Washington works, boil down to three basic principles of sound government: transparency, accountability, and enforcement.  President Obama’s rhetorical goals and ethics rules and lobbying regulations have fallen far short of fulfilling these three basic principles.  Lobbying disclosure, especially with the dramatic decline of federal registered lobbyists from 2009 and 2012, is now limited in its reach across the many forms of public issue advocacy.  Increased deregistration of lobbyists has resulted in a lack of transparency about who is advocating for whom, on what issue, and most importantly, about how much they are spending on those lobbying campaigns.  This unintended consequence of President Obama’s attempt to reduce conflicts of interest has seriously limited those with expertise from serving as appointees and on government advisory panels.  Little seems to have fundamentally changed in lobbying whether it is done transparently or non-transparently.  President Obama has changed the rhetoric, but not the way Washington works.

The constitutional and political reality of Washington has so far hobbled President Obama’s ability to bring major change to Congress and the way public policies are made.  Public attitudes about how Congress works, the role of money, and the place of lobbyists in politics are still very bad.  Citizens have gotten even more negative about Congress and President Obama has lost popular support since he has taken office as shown so clearly by outcome of the historic 2010 mid-term elections and in the rhetoric of the 2012 presidential election.  Obama has promised change, to be the reform-minded post-partisan president, but he has quickly adapted to the realities of working with a divided Congress.  He has tried to reform lobbying and Congress as a senator, candidate, and president, but he has failed to meet the high expectations of the American public to change the role of lobbyists and specialized interests in congressional policy making.