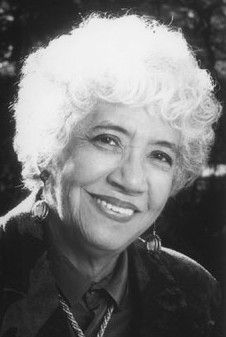 Freddye Scarborough Henderson, entrepreneur, columnist, and educator, was born on February 18, 1917 in Franklinton, Louisiana. She was educated in her hometown and graduated valedictorian from Booker T. Washington High School in Franklinton.  In 1937, Scarborough earned a B.S. in home economics from Southern University.  Four years later, on July 4, 1941, she married Jacob Robert Henderson in Atlanta, Georgia. Freddye Henderson continued her educational pursuits, becoming the first African American to earn a M.S. degree in fashion merchandising from New York University in 1950.

In 1944 Henderson opened a custom dress store in Atlanta. She operated the store until 1950 when she became an associate professor of applied art and clothing at Spelman College. She also held an adjunct position during the summer months at Atlanta University. Along with her teaching duties, Henderson became fashion editor for the Associated Negro Press where she reached a national audience with her syndicated column which appeared in black newspapers throughout the country.

After her first fashion show trip to Europe in 1954, Henderson realized African Americans were an untapped market for overseas travel.  The following year, Henderson and her husband opened Henderson Travel Service in Atlanta, the first black owned travel agency in the Southeast and the first accredited black travel service in the country.  Because of prevailing Jim Crow policies in the South, some African Americans had some reservations about extensive travel. Henderson was quick to remind critics that in Europe, blacks could ride in the front of the bus and not the back.

Some of Henderson’s early clients included Dr. Martin Luther King, Jr. and members of his Southern Christian Leadership Conference.  Besides arranging King’s trip to receive his Nobel Peace Prize in 1955 in Oslo, Norway, Henderson accompanied him there. Her professional relationship with King gained her trust and popularity in the national black community.

Besides promoting air travel to Europe, Henderson’s company pioneered African American travel to Africa. Although commercial airlines refused to travel to Africa, Henderson’s agency chartered airplanes, sending thousands of black tourists to West African countries like Ghana.  In the early 1970s, the travel agency had broadened its tourism market to include China as a destination.  Along with her success in overseas travel, Henderson served as tour escort for Ambassador Andrew Young’s trade mission trips to Jamaica and Trinidad.

Henderson’s travel agency received praise and recognition for its ability to bridge cultural divides. In 1951 the Atlanta Daily World honored her for her promotion of overseas travel. Iota Phi Lambda Sorority also selected her as woman of the year in 1954, and five years later the National Association of Fashion and Accessory Design recognized Henderson as a “fashionista” in the industry.

Freddye Scarborough Henderson succumbed to complications from a neurological disease on January 19, 2007.  She was 89 and left behind three children.  Her husband and one child had preceded her in death. Henderson’s daughter, Gaynelle Henderson Bailey, continues her mother’s legacy as the owner of Henderson Associates/Henderson Travel Service in Washington, D.C.