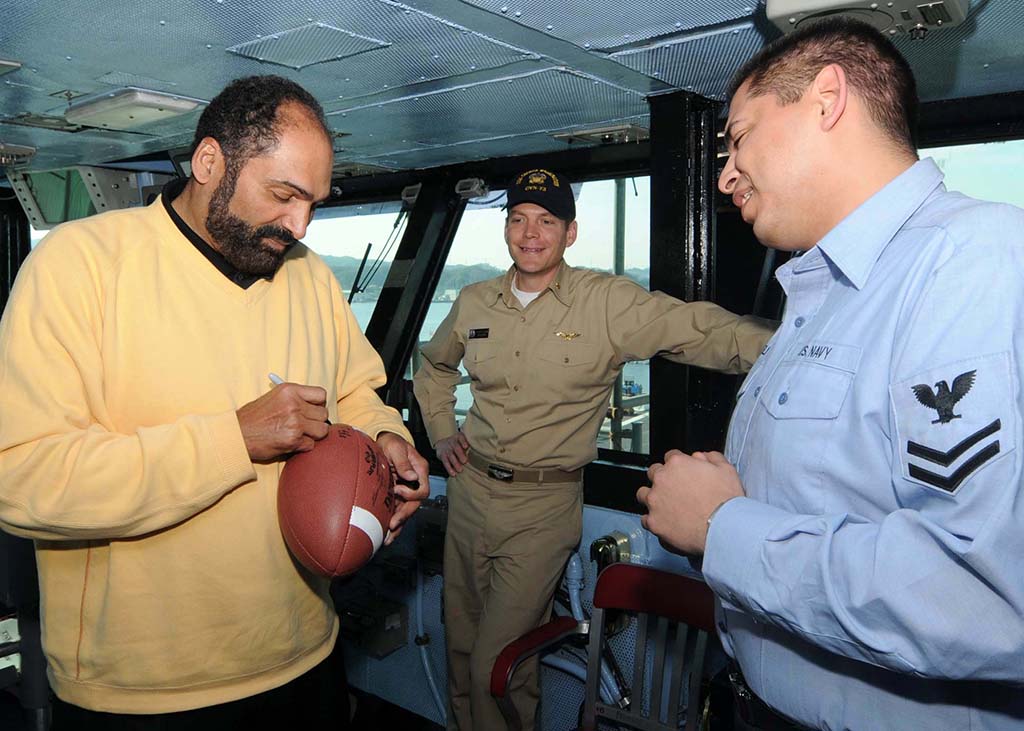 Known as one of the leading football players with the Pittsburgh Steelers, Franco Harris was born in Fort Dix, New Jersey on March 7, 1950. He was the son of an African American soldier who served in World War II and an Italian “war bride” mother. Harris grew up in Mount Holy Township, New Jersey, in a family of nine, where he attended Rancocas Valley Regional High School. He earned a scholarship to play football at Pennsylvania State University where he became an All-American fullback, rushing for 2,002 yards and 24 touchdowns while blocking for another All-American; his teammate and future NFL star running back, Lydell Mitchell.

Harris entered the 1972 NFL Draft where he was chosen 13th overall in the first round by the Pittsburgh Steelers over his teammate, Lydell Mitchell. He was named the NFL rookie of the year in 1972 by The Sporting News and United Press International after rushing for 1,055 yards and 10 touchdowns.  Although Franco was generally known as African American, he became very popular with Pittsburgh’s Italian American population. His fans in that community dubbed themselves as “Franco’s Italian Army.”

Harris was involved in one of pro football’s most famous and controversial plays, the “Immaculate Reception,” in the 1972 American Football Conference playoffs.  Pittsburgh was trailing the Oakland Raiders 7-6 with five seconds on the clock to play when a Terry Bradshaw (Steelers Hall Of Fame Quarterback) pass is bounced off the shoulder pad of Oakland Raider defensive back Jack Tatum. Harris grabbed the ball while it was in the air and ran it in for the winning touchdown to win the Steelers’ first playoff game in four years which was key in propelling them to four Super Bowls at the end of the decade.

In 13 professional seasons, Harris gained 12,120 yards on 2,949 carries; 4.1 yards per carry average, and scored 91 rushing touchdowns. He also caught 307 passes for 2,287 yards, 7.4 yards per reception average, and 9 receiving touchdowns. He rushed for 1,000 yards for eight straight seasons breaking a record set by Jim Brown. Harris’s 12,120 career rushing yards rank him 12th all time in the NFL, while his 91 career rushing touchdowns rank him 10th all time tied with Jerome Bettis.

Franco Harris was selected to nine consecutive Pro Bowls but he cites the two most important accomplishments of his thirteen year career, his four Super Bowl Championships and being both the first African American and Italian American to win the Super Bowl MVP.  After playing for Pittsburgh for twelve years, Harris finished his career in Seattle, after playing a season for the Seattle Seahawks. At 6-foot-2 and 225 pounds, Franco Harris, Number 32, helped shape the running back position as it is known today.  Harris was inducted into the pro-football Hall of Fame in 1990.  Harris today is married and has a son named Franco “Dok” Harris. The family lives in Pittsburgh.