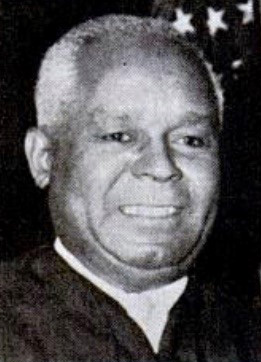 Richard A. Harewood was a prominent lawyer, state representative, and judge in Chicago, Illinois. He was born on June 25th, 1900 in Barbados, British West Indies and raised there until he was seven years old. His father who was a soldier in the British Colonial Army, died when Harewood was three years old, and his mother died when he was seven years old. His uncle, Fitzhugh Pilgrim, decided to bring Harewood to with him to Chicago, Illinois in 1907.

Harewood attended and graduated from Phillis Wheatley High School in 1918 and soon after enrolled in the University of Illinois. During Harewood’s years in college, he grew an interest in law and earned his bachelor’s degree in 1922. After graduating, he briefly taught at Talladega College in Alabama for a year. His interest in law inspired him to go back to Chicago and attend The University of Chicago Law School. He graduated from law school and was admitted into the Illinois Bar in 1926.

Harewood initially had a difficult time finding a job in the legal field for a few years but eventually served as Assistant Corporation Counsel for the city of Chicago. A few years later, he was offered a job as the assistant State’s Attorney for Cook County.

In 1936, Harewood was elected as a Republican in the Illinois House of Representatives. His term lasted until 1939. While in the state legislature and afterwards Harewood continued to practice law for the next twenty years. In 1956, Harewood ran for office once again. He was added to the ballot after State Representative Robert Romano’s death, leaving an empty seat in the House. This time Harewood ran as a Democrat and was elected into the House of Representatives. After serving another term, Harewood resumed his legal career and became a judge in Circuit Court of Cook County. After serving in Circuit Court for two years, Harewood became a judge in the Criminal Court of Cook County in 1962.

Harewood gained a reputation during his first thirty days as a judge in Criminal Court. He was known as one to be tough on crime and was known for his stern attitude during trials. During his first month in criminal court sessions over a hundred and eighty defendants obtained a change of venue and/ or judge in order to avoid a trial in Judge Harewood’s court. Harewood was also criticized for not participating in pretrial conferences which allowed a discussion between the judge, the defense lawyer, and the state’s attorney. This would allow judges to be familiar with the case before trial. Harewood was opposed to this because he believed that cases should be fully tried in court without a prior court opinion.

After serving over a decade in Criminal Court, Harewood retired in 1976. He and his wife, Patricia, continued to live on the South Side of Chicago until Harewood’s death on November 16, 1985.