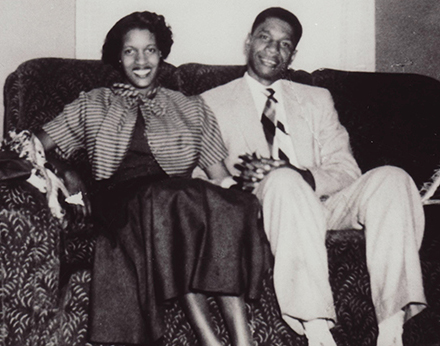 Myrlie (Beasley) Evers-Williams is a civil rights activist, a journalist, author, and a former chair of the National Association of the Advancement of Colored People (NAACP). She was born in Vicksburg, Mississippi on March 17, 1933. She was raised by her grandmother, Annie McCain Beasley, a schoolteacher, after her parents separated when she was only a year old. She attended Magnolia High School in Vicksburg, where she was a member of Chansonettes, an all-girl vocal group who were a part of Vicksburg’s Mount Heroden Baptist Church. Beasley also took piano lessons, performed songs, and wrote and recited poetry. Soon after graduating from high school in 1950, Beasley attended Alcorn A&M College. She intended to study music in college until she met Medgar Evers.

Medgar Evers was a World War II veteran and was eight years older than Beasley. They met on Beasley’s first day of college and fell in love. On December 24, 1951, Beasley and Evers married. In 1954, Medgar Evers became Mississippi’s field secretary for the National Association for the Advancement of Colored People (NAACP). Soon afterwards, she became his secretary. Together they organized voter registration drives, civil rights demonstrations, and fought to end segregation in public schools.

Myrlie Evers devoted her life to bringing her husband’s killer to justice. In 1964, Beckwith was tried for the murder of Medgar Evers, but was not convicted. Two separate all-white juries were unable to reach a verdict. However, almost thirty years after her husband’s death, Beckwith was arrested once again and tried in front of a multi-racial jury, which found him guilty of murder.

Evers continued her advocacy for justice. She moved to California and continued as a civil rights activist working with the NAACP. She ran for chairperson of the board of directors, and in 1995 was elected to that post. Through her position, she was able to improve the organization’s financial status by fundraising to clear the organization’s debt. Evers has received many awards for her work, such as the Glamour Woman of the Year Award (1995), the Spingarn Medal (1998), the highest award given by the NAACP, and the BET Humanitarian Award (2014). Evers wrote her autobiography titled Watch Me Fly: What I Learned on the Way to Becoming the Woman I Was Meant to Be, which was released in 1999.

In 1976, Myrlie Evers married Walter Williams, a labor and civil rights activist. He had intended to work alongside her as she became NAACP’s chairwoman in 1995, but he was diagnosed with cancer. Four days after Evers-William’s appointment, he passed away in their home on February 22, 1995.