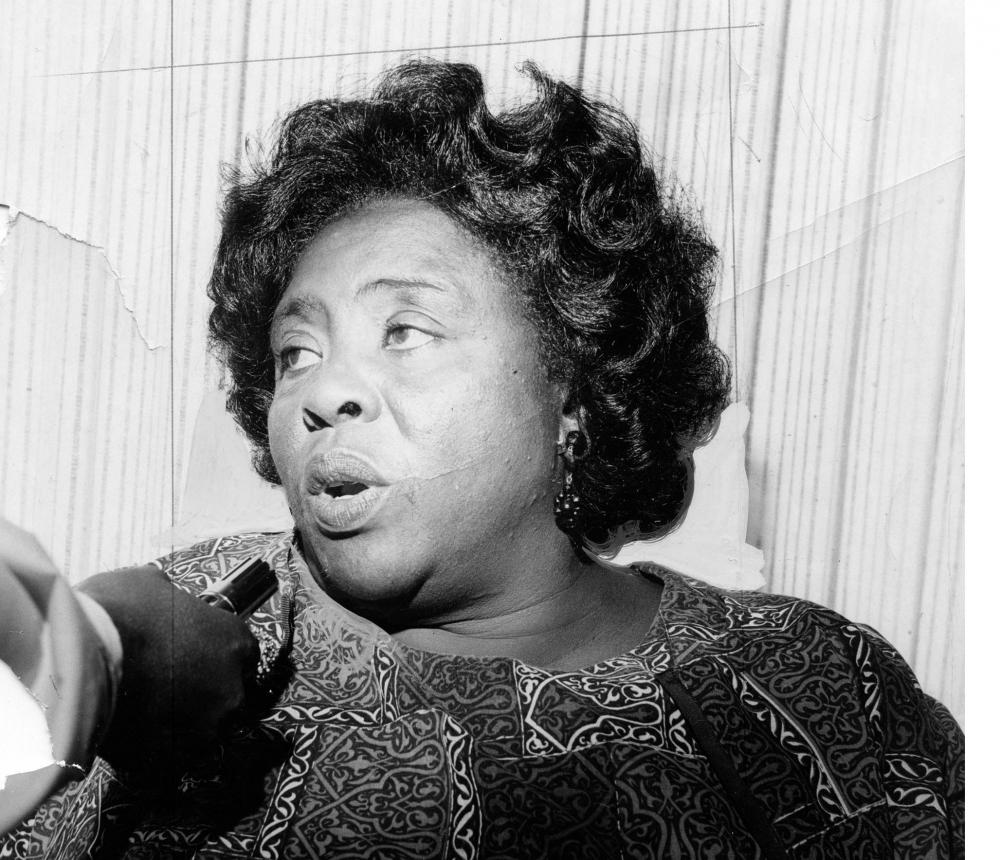 Fannie Lou Hamer was a grass-roots civil rights activist whose life exemplified resistance in rural Mississippi to oppressive conditions. Born on October 6, 1917 in Montgomery County, Mississippi, to a family of sharecroppers, she was the youngest of Lou Ella and Jim Townsend’s twenty children.  Her family moved to Sunflower County, Mississippi in 1919 to work on the E. W. Brandon plantation.

Hamer’s activism began in the 1950s when she attended several annual conferences of the Regional Council of Negro Leadership organized by Dr. T.R.M. Howard, a wealthy businessman and civil rights leader in the all-black town of Mound Bayou, Mississippi.  There, Hamer encountered prominent civil rights leaders such as Thurgood Marshall of the National Association for the Advancement of Colored People (NAACP) and Michigan Congressman Charles Diggs.

Several pivotal moments in Hamer’s life became public reminders that America’s vision of democracy was incongruent with its horrifying reality. In 1961 she was sterilized without her knowledge or consent by a white doctor as part of the state of Mississippi’s plan to reduce the number of impoverished blacks in the state.  On August 23, 1962, after hearing a sermon by Rev. James Bevel, she volunteered to become an organizer for the Student Non-Violent Coordinating Committee (SNCC) to help black Mississippians register to vote.  While she was traveling by bus on June 3, 1963, state law enforcement officers in Winona, Mississippi, took Hamer and fellow activists to Montgomery County Jail where they were beaten mercilessly. She testified that she was beaten until her “body was hard.” She suffered a blood clot, sustained damage to her kidney, and required a month to recover from the assault.  Hamer was not intimidated and after her recovery returned to the effort to register and organize black voters.

In 1964, Hamer became one of the statewide leaders in the Freedom Summer Campaign which brought hundreds of volunteers from across the nation to Mississippi to help with voter registration.  It was during that summer campaign that three civil rights workers, James Chaney, Michael Schwerner, and Andrew Goodman, were killed by anti-black terrorists.

Hamer became a national figure during the summer as the co-founded the Mississippi Freedom Democratic Party (MFDP). The Democratic Party in Mississippi barred black participation. As a consequence black and white activists in the state created the MFDP.  Since 1964 was a Presidential election year, and the regular Democrats had threatened to withhold support to the national Democratic ticket, Hamer and other MFDP leaders traveled to the National Democratic National Convention in Atlantic City, New Jersey to argue that they should be the official delegation from Mississippi to the convention.  Hamer, vice president of MFDP, spoke before the Credentials Committee protesting the all-white delegation from Mississippi. Although President Lyndon Johnson gave an emergency presidential press conference to prevent her testimony from going live over the three television networks, her speech was later aired across the country. In stirring testimony she described the oppressive conditions she and other black Mississippians faced on a daily basis and urged recognition of the MFDP to encourage blacks to register to vote.

Senator Hubert Humphrey who was campaigning for the vice presidential nomination, led a group of high level Democratic Party activists to persuade Hamer and the MFDP to accept a compromise that would allow token (non-voting) representation in the regular Mississippi Democratic delegation.  Hamer and the MFDP rejected the compromise and returned to Mississippi.  Her campaign, however, led to significant reforms in the way delegates are selected for the national Democratic Party conventions.  Beginning in 1968, the Democratic Party required equality of representation in state delegations.

Hamer continued to work in Mississippi for voting rights.  She ran unsuccessfully for Congress in 1964 and in a special election in 1965.  In 1968, she was part of the regular Mississippi delegation to the National Democratic Party Convention where she was an outspoken critic of the Vietnam War.  Hamer was also inducted as an honorary member of Delta Sigma Theta Sorority.

On March 14, 1977, Fannie Lou Hamer died of cancer at age 59 in Ruleville, Mississippi. She was buried at Freedom Farms Cooperative, an organization she helped to establish so that poor farmers would have an opportunity to purchase their own land. Her epitaph reads: “I’m sick and tired of being sick and tired.”