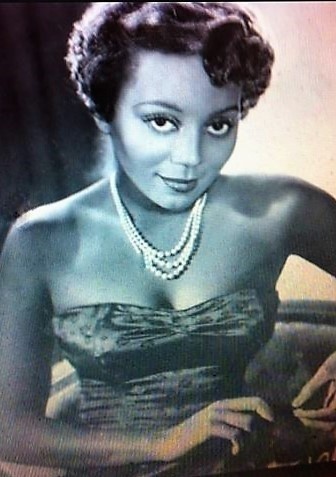 Singer Joyce Bryant was born Ione Emily Bryant in Oakland, California on October 14, 1928. She was the third of eight children.  Her parents were Whitfield Bryant, a railroad chef and devout Seventh-Day Adventist, and Dorothy Green Withers.  She was raised in San Francisco, California but at 14 Joyce eloped and annulled, and she quickly moved to Los Angeles in 1942.

At a night club that allowed audience tryouts, Bryant sang “On Top of Old Smoky,” her first public performance, and was offered payment and a two-week contract at $125 a week. In 1946, after four years of building her career, Bryant because of her voice and her appearance became the “Black Marilyn Monroe,” “the Bronze Blond Bombshell,” and “the Voice You’ll Always Remember.”

In 1952, Bryant became the first black entertainer to perform at the Hotel Algiers’ Aladdin Room in Miami Beach, Florida. Despite her fame and talent, Bryant was constricted by the same segregation laws as black menial employees. While she could perform at Algiers, the New York owners refused to allow her to spend the night at the hotel or be photographed outside the Aladdin Room.

There was violence while she toured the South; the KKK burned an effigy of her, and in an interview, she discussed how she felt unsafe in Alabama because of lynching. Despite this, she performed at other prominent entertainment venues including Manhattan’s Copacabana in 1953, Hollywood’s Coconut Grove, the Chicago Theater in Illinois, and Harlem’s Apollo Theater all in 1955. She was also one of the few black entertainers to appear in major magazines.  Life magazine, for example, profiled her in 1953. By the mid-1950s Bryant was the first dark-skinned black woman to be a national sex symbol. By that point she made approximately $150,000 per year.

Her stage personality and career were provocative and exciting. Her dresses, made primarily by Zelda Wynn Valdes, an African-American designer, were revealing and so tight supposedly she had to be carried off stage when finished. Her hair was painted silver and her sultry voice and sensual songs such as “Love for Sale,” and “Drunk with Love” captivated club audiences but were banned from radio play.

In 1955, her career abruptly ended. After a performance she was physically assaulted because she refused sexual advances. The incident soured many of her fans and tainted her provocative public image. She also abused prescription pills in order to sleep, her hair was damaged from intensive coloring, and she had to resort to wigs after a disastrous bleaching. By the end of 1955 when her multiple performances had exhausted her throat, a doctor suggested spraying cocaine to soothe the pain even though the procedure might make Bryant addicted. Her manager urged the doctor to do it regardless of the risks or Joyce’s feelings. At age 28, Bryant walked away from her entertainment career and enrolled in Oakwood University, an historically black, Seventh Day Adventist college in Huntsville, Alabama.

In the 1960s, Bryant returned to the stage. Now under the training of Frederick Wilkerson of Howard University, she sang opera. She worked as a vocal instructor and periodically performed with the Watergate Symphony in Washington, D.C., the New York City Center Opera Company and various European opera companies. Today, the “Lost Diva” lives with Alzheimer’s and is taken care of by her niece Robyn LaBeaud.