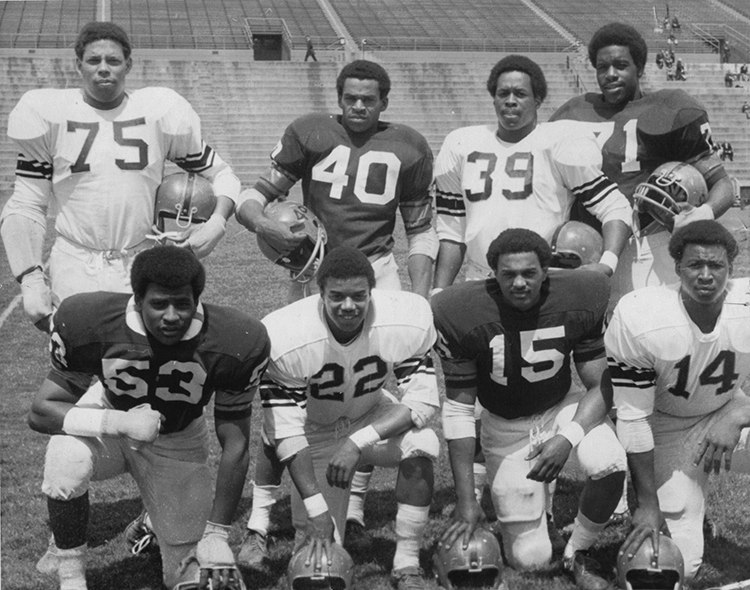 In 1969 a group of nine student-athletes boycotted Syracuse University’s football program to demand change and promote racial equality. Popularized erroneously in 1970 by the media as the “Syracuse 8,” the nine students behind the boycott were Gregory Allen, Richard Bulls, Dana Harrell, John Godbolt, John Lobon, Clarence “Bucky” McGill, A. Alif Muhammad, Duane Walker, and Ron Womack. The student-athletes’ four demands were access to the same academic tutoring as their white teammates; better medical care for all team members; starting assignments based on merit; and racially integrating the coaching staff, which had been all white since 1898.

The Syracuse 8 demand for equal access as white players to tutors and academic advisors was based on their being relegated to general reading and education classes predicated on notions of their limited academic ability. Their demand was based on their awareness of how their academic potential exceeded the university’s expectations.

The demand for better medical care was rooted in the fact that the medical doctor for the team was a gynecologist by training and was hesitant to touch black bodies. His primary recommendation for every injury was ice and rest.

The demand for a black coach was prompted by the black players’ accusations of discriminatory practices by their coach, Floyd Ben Schwartzwalder, and his assistant coaches. During practices a limit was placed on the number of black players who could be on the field at the same time. They believed this practice restricted their talents and abilities and decreased the team’s likelihood of winning games. The players believed that many of these issues could be remedied by hiring a black coach.

After associate coaches ignored the players request to hire a black assistant for a year, one of the Syracuse 8, Greg Allen, met with head coach Schwartzwalder in spring 1969. Allen explained his position, but the coach refused to listen. During the spring season, the players attempted to nudge coach Schwartzwalder one more time. When he refused their request, they walked out of spring practice and leaked their act of resistance to the media.

The media focused on only one request, the hiring of a black assistant coach, ignoring their other grievances. After being labeled black dissidents, the Syracuse 8 were suspended from the team. Some white teammates stood in solidarity and threatened to boycott if the black players were not allowed back, but they were overpowered by the alumni who wanted all the black players off the team and their scholarships revoked. After the intervention of Syracuse football alumnus Jim Brown, who acted as an intermediary between the coach and the players, a black assistant coach was hired. However, that coach often sat in the back of the room and was not listed on the coaching roster.

The Syracuse 8 continued their boycott through the 1969 football season. Syracuse Chancellor John Corbally, prompted by faculty sympathetic to the 8, allowed the players to keep their scholarships and to graduate, which they did. In 2006, thirty-six years after leaving the team, during a Syracuse University-University of Louisville halftime ceremony, the nine former players were recognized with their letterman jackets for the courageous stand they took against racism.

“The Story of the Syracuse 8,” The Players’ Tribune, October 25, 2015, https://www.theplayerstribune.com/en-us/articles/syracuse-football-1960s-race-civil-rights; WBUR. (2017, November 17). “Before Kaepernick, The ‘Syracuse 8’ Were Blackballed By Pro Football,” WBUR Radio, https://www.wbur.org/onlyagame/2017/11/17/syracuse-8-football-boycott-kaepernick.