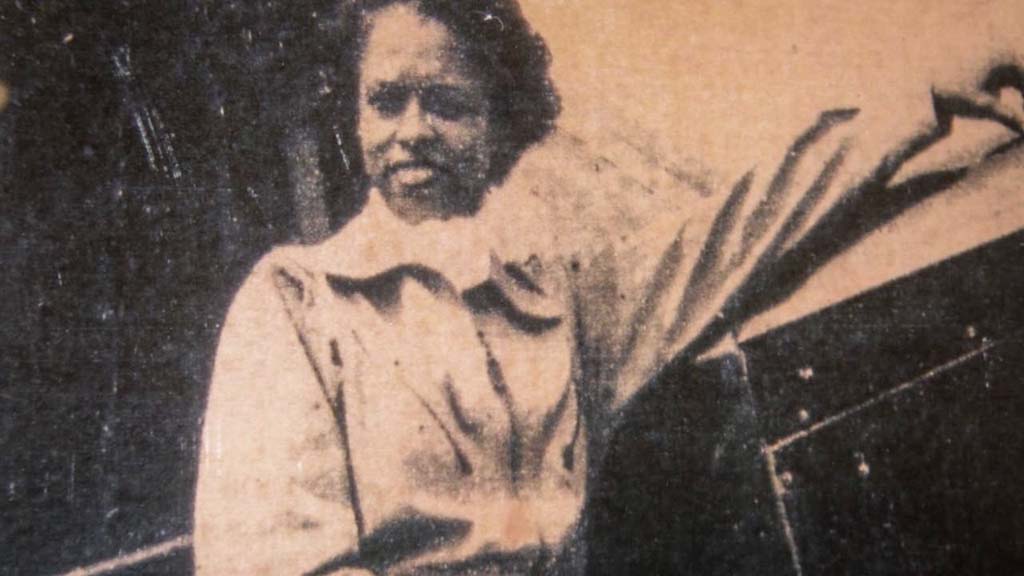 Azellia White was the first African American woman to earn her pilot’s license in Texas and a trailblazer in the aviation field.

Jones was born in Gonzalez, Texas, on June 3, 1913. Her father was a sharecropper and her mother was a midwife. She attended the local schools, and married her childhood sweetheart, Hulon “Pappy” White in 1936. The couple had one child that was stillborn. They moved from Texas to Tuskegee, Alabama in 1941 where her husband became a mechanic for the Tuskegee Airmen unit.

Later the same year, former First Lady Eleanor Roosevelt visited the Tuskegee Army Air Field, and requested a ride with Tuskegee Chief Instructor Charles A. Anderson. Although the Secret Service did not approve, Mrs. Roosevelt flew for over an hour with the instructor, drawing national attention to the unit. White was present at that visit, and was inspired by Mrs. Roosevelt’s interest in flying. She began to train with her husband and his colleagues, and taught herself to fly. She took her maiden flight in a Taylorcraft plane.

The Whites returned to Houston at the end of the war in 1945, and opened an aviation school for African Americans called Sky Ranch Flying Service in 1946 with Ben Stevenson and Elton “Ray” Thomas, two other Tuskegee Airmen. The school served as an airport for the segregated Houston community, providing chartered flights, delivery services, and flying instructions to all interested in learning how to fly. White officially received her pilots license on March 26, 1946 at the age of 32. Flying students would often ask her to take them on flights, and she loved to surprise them with midair stunts. With segregation laws so entrenched on the ground, White often preferred to travel by air, taking her niece with her on local shopping trips. The flying school closed its doors in 1948, after financial restrictions to the GI Bill made operations difficult.

White was inducted into the Texas Aviation Hall of Fame in 2018, at the age of 105. The Science Lab at Sterling Aviation High School in Houston, Texas is named in her honor, and she was honored by the Huston Area Urban Guild for her trailblazing efforts. She also received the Trailblazer Award from the Black Pilots of America. White died of natural causes on September 15, 2019. She was 106 years old.