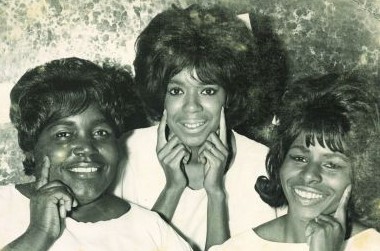 The Andantes were a female group used primarily for background vocals for the Motown record label. The group’s founding began with friends Jackie Hicks (first alto), Marlene Barrow (second alto), and Vicki Wright (soprano). All three women sang in their home churches and were already being recruited by local music labels. In 1961 the trio began recording background vocals for musicians at the Motown studio in Detroit, Michigan. Wright quit unexpectedly, and Louvain Demps (soprano), a staff member of the studio, was asked to fill in. At that point the trio formed, calling themselves The Andantes.

From the first recording, Motown executives discovered that the Andantes had perfectly blended voices and learned they had the ability to create an arrangement on the spot. As Motown began to develop its distinctive soulful sound, the Andantes melodies became a crucial part of that sound. The three young women practically lived at the studio for numerous years. They had a room with beds in case recordings ran late into the night. As new artists were signed, and new tracks were being recorded, the Andantes were in the studio almost daily. They can be heard on “Baby, I Need Your Loving” by The Four Tops (1964). “Stop! In The Name of Love” by The Supremes (1965), “Jimmy Mack” by Martha & The Vandellas (1967), and I Heard it Through the Grapevine” by Marvin Gaye (1968).

The trio also performed at Detroit area nightclubs, but never toured with other Motown artists. They recorded a few singles, but none of their own songs topped the charts like the stars they sang background for. Many recordings of The Supremes contained vocals of The Andantes, who were often used to fill in for Mary Wilson and Cindy Birdsong during illness and pregnancy. The extensive list of musicians they sang background vocals for includes The Temptations, The Marvelettes, Brenda Holloway, Mary Wells, Stevie Wonder, Edwin Starr as well as non-Motown recordings by Billy Kent, Jackie Wilson, and numerous others. The Andantes can be heard on over 20,000 Motown recordings from 1961 to 1972, nearly every song the label recorded in that eleven-year period.

In early 1972, Motown moved its Detroit based business to Los Angeles, California, and did not renew the Andantes contract. Devastated at the sudden end of their musical career, the women began looking for other sources of employment. Barrow, now Barrow-Tate because of her marriage, was employed at the Michigan Department of Labor; Demps moved to Atlanta and worked at a Georgia State Center for children with intellectual disabilities; and Hicks worked for the Detroit Water and Sewage Department.

The group temporarily reunited in 1990 in Detroit, singing for Motorcity Records, with Motown alumni Pat Lewis. They recorded an album under their stage name before permanently disbanding in 1992. The Andantes reunited in 2013 to attend an exhibit at the Motown Museum in Detroit that featured them alongside the Supremes, the Vandellas and the Marvelettes. Barrow-Tate died in 2015 at the age of 73. Hicks and Demps receive residual payments for their Motown work as their music can still be heard each day around the world.