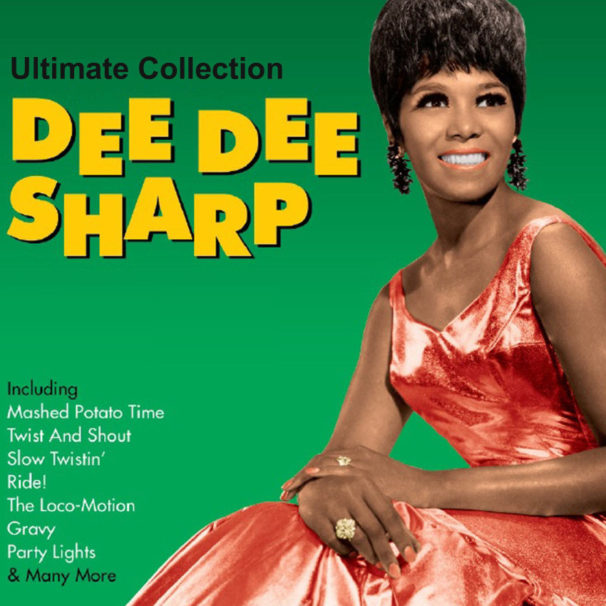 Dee Sharp, is a popular American R&B singer, known for “Mashed Potatoes Time,” a number one hit in 1962. She was born in Philadelphia, Pennsylvania, on September 9, 1945, as Dione LaRue.

LaRue has a musical background as a lead singer of group of gospel-singing teenagers, playing piano at an early age as well as being the director of the choir at Eternal Baptist Church in Philadelphia, which was her family’s church pastored by her grandfather, Rev. Eubie Gilbert.

When LaRue was 13 years old her mother was injured in a car accident. Late that year, to make money to help the family, Sharp answered an ad for a singer who could play piano and sight-read music. LaRue got the job with the Clara Ward singers, singing backup on many of Ward’s records. She later credited Willa Ward, sister of the gospel singer, with getting her started as a professional musician. While on one tour in New York Sharp took the opportunity to produce a record centered around a new dance craze, the Mashed Potatoes. Sharp recorded “Mashed Potatoes Time” on the Cameo/ Parkway label and the song became an overnight success. She adopted the stage name Dee Dee Sharp for the recording partly because she was already called D and sang in D sharp.

Recording “Mashed Potatoes Time” at the age of 16, Sharp was the first Black female teen idol.

Living in Philadelphia, the home Dick Clark’s American Bandstand helped her career. She appeared on the syndicated teen dance show many times from 1962 to 1981 and in 1965 he joined Clark’s popular Caravan of Stars.

While “Mashed Potatoes Time” propelled Sharp to stardom, first record pigeonholed the Philly songstress as a teenybopper forever to be identified with her number one smash from 1962, Sharp’s next hit, “Gravy (For My Mashed Potatoes),” was released in 1962, peaked at #5 on the U.S. Pop Chart and #7 on the U.S. R&B Chart. Also, in 1962 Sharp collaborated with fellow Philadelphian Chubby Checker on the album Down to Earth. Ride! “Do the Bird,” was released in March 1963. Other songs from Sharp were “Wild,” “Willyam, Willyam,” “Never Pick a Pretty Boy,” and “He’s No Ordinary Guy,” were all released 1964 and “I Really Love You,” and “Standing in the Need of Love,” were released in 1965.

Sharp left Cameo because of slumping sales of her recordings and signed with Atlantic Records in 1966. Then in 1967 she and Kenny Gamble, her husband, founded Gamble Records with Leon Huff. In 1969 she released “The Bottle of Me” on the Gamble Label followed in 1975 by “Happy Bout the While Thing.” Despite the major success of Gamble and Huff with other Philadelphia artists like Teddy Pendergast in the 1970s, Sharp never had a hit on her husband’s label. The couple divorced in 1980.