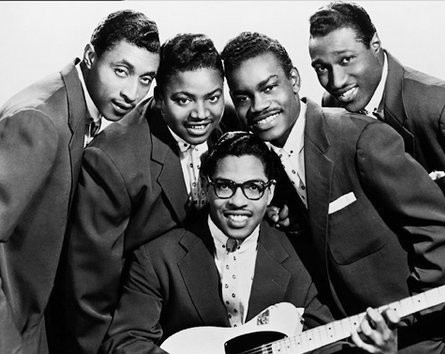 The Moonglows were one of the early influential groups in rhythm and blues.  Formed as a duo in Cleveland, Ohio in 1949 by Harvey Fuqua and Bobby Lester as the two friends returned from the U.S. Army, they were later joined by Ed Wiley. The trio began making what was then called jump blues music in 1951. With little initial success, the group split up with Fuqua and Lester joining Danny Coggins and Prentiss Barnes to create a new group, Crazy Sound.

In 1952 they were recognized by pioneer Cleveland Rock and Roll DJ Alan Freed who helped sign them to the Champagne Records label which he owned and managed. They renamed themselves the Moonglows in 1953. With Lester and Fuqua leading the singing and the writing and with Freed’s backing they joined Chess Records, a much larger Chicago, Illinois-area label in 1954. On their first day with the new label they recorded 13 songs including “Sincerely” which reached the number one spot on the R&B charts and No. 20 on the pop charts. This hit would propel their career and the song would be covered later that year by the McGuire Sisters who took it to No. 1 on the pop charts.

In 1955 the Moonglows began touring with Alan Freed’s Rock and Roll Shows which included other R&B artists such as Joe Turner, The Clovers, and Lowell Fulson. The Freed Rock and Roll Shows brought this music and artists like the Moonglows to a national audience.  Following the tour, they recorded more songs but none had the success of “Sincerely.” In the summer of 1956 they released “We Go Together” and “See Saw” which both peaked at No. 1 on the R&B chart and as importantly attracted white listeners, making them one of the first “crossover” groups that built an audience beyond their R&B fans. They also had entered the rock limelight when they were asked to play in the movie Rock, Rock, Rock in 1956 and Mr. Rock and Roll a year later.

By 1957, however, Lester stepped down as co-lead vocalist and Fuqua, who already led on most of the group’s songs, would become the solo lead. This change generated tension between them which ultimately affected the entire group. The Moonglows split up in 1957. Fuqua continued to make music as a solo artist.  In 1958 he released the “Ten Commandments of Love,” which reached No. 9 on the R&B charts, sparking legal controversy about whether the Moonglows or Fuqua would be credited with the song.  Eventually a compromise was reached and the song would go under the artist name: Harvey and the Moonglows.

The now Harvey and Moonglows changed as all of the core members except Fuqua left the group by the end of 1958. Fuqua recruited three new members: Marvin Gaye, Reese Palmer, and James Knowland. Fuqua would continue to make music as a songwriter and producer most famously with Motown Records in the 1960s.

Bobby Lester, the cofounder of the Moonglows, died in 1980 at the age of 49 due to complications from cancer in Louisville, Kentucky. Harvey Fuqua, the other cofounder and the last remaining member of the original group, died on July 6, 2010, at the age of 80 in Detroit, Michigan. The Moonglows were inducted into the Vocal Group Hall of Fame in 1999 and the Rock and Roll Hall of Fame a year later.