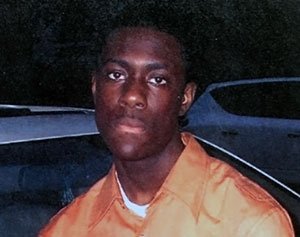 Ramarley Graham was born on April 12, 1993 to Constance Malcolm and Franclot Graham in The Bronx, New York. At the time of his death he was a student at the Young Scholars Academy of The Bronx where he aspired to travel the world and become a veterinarian. Graham died on February 2, 2012, at the age of 18 after being shot by a New York Police Department officer in his grandmother’s bathroom.

Ramarley Graham was spotted adjusting the waistband of his pants during a NYPD narcotics squad surveillance of a bodega near his home. Officers assumed Graham was concealing a gun. When plainclothes officers approached Graham, they reported that he ran to the home of Patricia Hartley, his grandmother, a few blocks away. Surveillance footage from outside the front entrance to Hartley’s building, however, shows Graham calmly walking up to the door and entering without urgency.

The same surveillance footage shows two officers running up to the building with their guns drawn just moments after Graham enters. As the two officers try to force their way through the locked door, other NYPD officers gained entrance through the rear of the building and opened the front door. One officer ran upstairs to Hartley’s apartment and broke down the door without a search warrant or announcing that he was a police officer.

Plainclothes Officer Richard Haste then ran into the apartment and discovered Graham in the bathroom attempting to flush a bag of marijuana down the toilet. Without any orders to comply, Graham was shot once in the chest in front of his little brother, Chinoor Campbell, and grandmother. Haste later reported that Graham reached into his waistband for a gun but no weapon was found in the Hartley apartment. Twenty minutes after the shooting, Graham was removed on a gurney from Hartley’s home by police officers. His family suspected he had already died but he was officially pronounced dead at 3:53 PM at the Montefiore Medical Center.

Patricia Hartley was arrested, detained, and questioned by NYPD about the series of events that occurred in her home for seven hours at the local precinct after watching her grandson, Graham, die at the hands of Haste. Graham’s body was also misidentified after his death, which prevented his parents from seeing his body for four day after his murder.

In 2012, a grand jury voted to indict Haste, but the indictment was tossed out due to a prosecutorial mistake. A second grand jury declined to indict Haste, allowing him to walk free. After further investigation during a departmental trial in March 2017, Haste was found guilty on all charges and turned in his badge and gun before Deputy Commissioner of Trials, Rosemarie Maldonado, asked Police Commissioner, James O’Neill, to fire him. Although Haste is no longer employed by NYPD, many people are still fighting to see justice for Ramarley Graham.