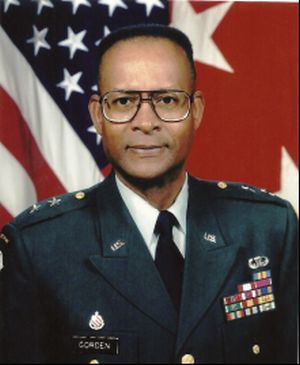 General Fred A. Gorden was the first black Commandant of Cadets, the officer in charge of the training, discipline, and physical condition of the Corps of Cadets at the United States Military Academy at West Point.  The Commandant of Cadets position is second only to the position of Superintendent of the Academy.

Born in Anniston, Alabama in 1940, Gorden’s family moved shortly afterward to Atlanta, Georgia.  Gorden was the fourth of five children and was raised by his childless aunt, who lived around the corner from his family.  When she moved to Battle Creek, Michigan to marry, he went with her.  There he attended the local high school and excelled in both academics and athletics.  He was in the National Honor Society and played on an all-city basketball team.

Gorden had been attending a local junior college in 1958 when he was notified about his appointment to West Point as a cadet.  He received the call from a lawyer from his hometown who in turn had been contacted by the area’s Congressman about the appointment.  Gorden was to be the only black cadet in his class.

Graduating with a Bachelor’s Degree in Science and Engineering in 1962, Gorden shortly thereafter married Marcia Ann Stewart, whom he had met during his freshman year.  He then earned his Ranger tab and parachutist badge at Fort Benning, Georgia, before being assigned to the U.S.-controlled Panama Canal Zone as a field artillery second lieutenant.  Marcia, who was expecting the couple’s first child, stayed with her parents at Fort Ord in California, before joining him in Panama.

Beginning in 1966, Gorden had two tours of Vietnam followed by an assignment in Korea. In 1968, Gorden earned a master’s degree in Spanish literature, language, and civilization from Middlebury College in Vermont.  The couple spent a year living in Madrid, where their second daughter was born.

Gorden and his family returned to the United States where he attended both the Armed Forces Staff College in Norfolk, Virginia and the National War College in Washington, D.C.

By 1980 Gorden was assigned as executive officer in the office of the US Army chief of legislative liaison.  Two years later he became commander of division artillery of the Seventh Infantry at Fort Ord, California.  There he was promoted to Brigadier General in 1984.  Three years later in 1987 he was appointed Commandant of Cadets at West Point at the age of 47.

By the late 1980s virtually all of the West Point Cadets were relatively young high school graduates as opposed to older cadets who previously reached the Academy after work experience in civilian or military life. Gorden led the effort to accommodate their interests in technology with the values and skills that had traditionally been associated with a West Point education.

General Fred Gorden stepped down as Commandant in 1989; his next assignment was commander of the 25th Infantry Division at Schofield Barracks, Hawaii.  From 1993 to 1995, he served as commander of the Army Military District of Washington.

In 1996 General Fred Gorden retired from the United States Army as a Major General after 34 years of military service. He spent five years in the private sector before fully retiring in 2001.  He currently lives in Georgia with his wife, where he is active in his community and spends his time studying African American military history.