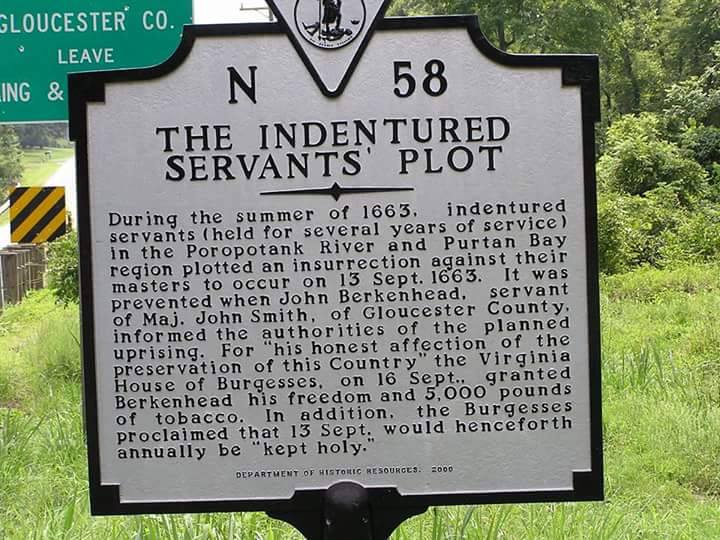 The group also planned to meet the following Sunday, September 6, 1663, at a place called Poplar Spring. The plan was for the servants to bring enough weapons that they could scavenge and steal that they hoped would arm a company of thirty men. From Poplar Spring, they would march to the home of Virginia’s Colonial Lieutenant Governor Francis Willis, a member of the governor’s council, to seize more arms and a much-needed drum. The group has recruited a drummer from the county militia company named Major John Smith.

The group’s main destination, however, was the Green Spring mansion of Governor Sir William Berkeley where they would demand that all indentured servants who were normally required to serve seven years of indenture, be released instead one year from the beginning of their service. It is unclear as to how the status of enslaved people would change.

John Birkenhead, one of the indentured servants who attended the meeting betrayed the conspirators and shared the plans to Governor Berkeley. In response the governor arranged for the conspirators to be ambushed at their meeting place and arrested. The general court tried the captured servants for treason and they were later hanged. On September 16, 1663, The Virginia House of Burgesses rewarded Birkendhead his freedom and five thousand pounds of cotton for revealing the plot.

The Gloucester County Conspiracy would mark one of the few times that indentured servants and enslaved people plotted together to gain their freedom but numerous servile insurrections would follow in what would become the United States.