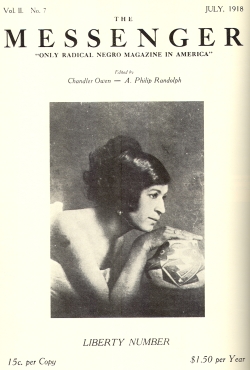 The Friends of Negro Freedom (FNF) was created by A. Philip Randolph and Chandler Owen, the owners of The Messenger magazine.  They formed the organization with goals of garnering support for black-owned businesses and helping provide African American workers with training in labor union organizing techniques.

The FNF distinguished itself from the leading civil rights organization of that era, the National Association for the Advancement of Colored People (NAACP) in that it was black led and financed, and it pushed for economic reform.  FNF also recruited mainly within a predominantly black working class constituency, arguing that the NAACP membership, mostly whites and middle-class blacks, was out of touch with the most important issues facing the majority of blacks at the time.  Randolph and Owen also hoped their organization would encourage socialism among U.S. black workers.  FNF excluded whites from membership, citing white involvement in the NAACP and the National Urban League (NUL) as examples of the weakening of what they viewed as legitimate black grievance against racial oppression and discrimination.

The group’s initial program included plans to negotiate with white employers to increase working opportunities for African Americans and to assist migrants from the South and immigrants from the Caribbean who had relocated in the North.  It also proposed an FNF union label which would identify products manufactured by companies that complied with the group’s goals of promoting socialism and eliminating racism. Randolph and Owen also envisioned the FNF as fighting for those victimized by price gouging and inflated rents.  Finally it campaigned to make John Brown’s birthday a national holiday among African Americans.

Despite its ambitious plans and its desire to differentiate itself from middle-class organizations, its greatest rival was Marcus Garvey’s Universal Negro Improvement Association (UNIA) which drew from the same working-class constituency that FNF hoped to organize. From its founding convention in Washington, D.C. in 1920, FNF leaders criticized the UNIA. By 1921, they had organized a “Garvey Must Go” campaign which ironically drew support from many members of the NAACP and National Urban League.  FNF leaders charged that Garvey’s organization was corrupt and posed a threat to the economic advancement of African Americans.  They believed UNIA schemes such as the Black Star Steamship Line diverted scarce resources from more important goals.

In January 1923, the FNF sent a public letter to United States Attorney General Harry Daugherty urging his office to prosecute and deport Marcus Garvey.  The FNF letter intensified the federal government’s efforts to destroy the UNIA.  Marcus Garvey was arrested and prosecuted for mail fraud later that year and sent to federal prison.  In 1927, he was deported from the United States.  The 1923 prosecution and conviction of Garvey also ironically sealed the fate of the FNF.  After his conviction, most members drifted away.  By November 1923, the group essentially ceased to function.