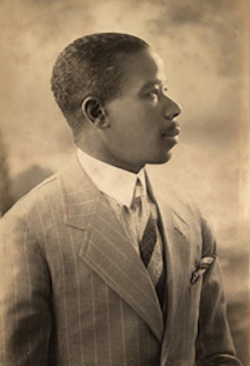 Massiah was born in Barbados, West Indies, on December 12, 1886. He immigrated to the United States in 1909 where he started his career as a laborer, working during the day and studying at night. He studied architecture at the Pennsylvania School of the Fine Arts and earned a degree in civil engineering at Drexel Institute around 1915 (now Drexel University). By the early 1920s, he had established his own business. Massiah became a U.S. citizen on April 29, 1931.

Massiah was among the first successful black contracting engineers in the country. He established a construction business during a time when it was almost impossible for black Americans to obtain financing, insurance, and acceptance by trade unions.

Massiah first came to public notice in the fall of 1925 when he was heralded in the press for his successful construction of an elliptical concrete dome on the Ascension of Our Lord Roman Catholic church in Philadelphia. The dome was the first of its kind in the country. His methods of using reinforcements in concrete were prior to widespread building codes in the 1920s. Two years later, in the fall of 1927, Massiah and his construction company were again featured in the press when he was selected as the general contractor for the Walnut Plaza Apartments in West Philadelphia. Massiah’s work on this project led to his receiving the bronze medal in business by the William E. Harmon Foundation in January 1929 for outstanding work in building engineering, especially concrete construction.

As his firm’s reputation grew, Massiah received numerous government contracts. He subcontracted reinforced concrete work for construction projects throughout the nation. During a forty-five-year span of activity stretching into the late 1960s, Massiah was responsible for building numerous structures, including the William Donner X-Ray Laboratory at the University of Pennsylvania; the Trenton New Jersey Sewage Disposal Plant; Army barracks at Fort Meade, Maryland; and U.S. Post Office buildings in Coatesville, Pennsylvania; Camden, New Jersey; and Germantown (a section of Philadelphia), Pennsylvania. He also built the Morton Housing Development, a $5 million project in Philadelphia.

Edith Lamarre and Frederick Massiah were married in 1950 and had two sons, Allen and Louis, and a daughter, Frederica Massiah-Jackson. Massiah was a member of the Phi Beta Sigma Fraternity, the Philadelphia Chamber of Commerce, the Masonic Order, and the National Association for the Advancement of Colored People (NAACP). Frederick McDonald Massiah died on July 7, 1975, at the age of eighty-nine.