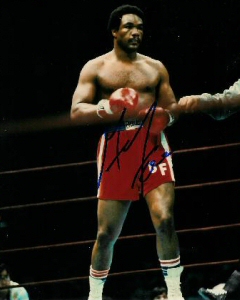 George Edward Foreman was born in Marshall, Texas on January 10, 1949 and raised in Houston’s Fifth Ward.  He took up boxing in his teens while working in the Job Corps. A successful amateur career was capped with a gold medal in the 1968 Olympic Games in Mexico City, Mexico.

Foreman turned professional in 1969 and quickly worked his way up the heavyweight ranks to earn a shot at the title against Joe Frazier. He captured the heavyweight crown with an impressive two-round knockout of Frazier on January 22, 1973 in Kingston, Jamaica. Most knowledgeable boxing fans thought the intimidating fighter would hold the title for the next decade, but he lost the crown to Muhammad Ali in Kinshasa, Zaire on October 30, 1974.

In 1977 Foreman lost for the second time, this time to Jimmy Young in a 12-round decision in San Juan, Puerto Rico. Following the fight Foreman became a born-again Christian and announced his retirement from boxing.  He returned to Houston where he opened a church and the George Foreman Youth Center. Ten years later, and running short on funds, 38-year old Foreman embarked upon a boxing comeback. Starting slowly, he gradually worked himself into contention for another shot at a title but fell short in his first attempt against Evander Holyfield, losing a 12-round decision in 1991. He received another opportunity two years later, but once again failed, losing to Tommy Morrison for the World Boxing Organization title.

Finally, on November 5th of 1994, at age 45, Foreman knocked out International Boxing Federation and World Boxing Organization title holder Michael Moore, to become the oldest heavyweight champion in history. He retired permanently in 1997 at the age of 48 with an overall record of 76 victories and 5 defeats.  George Foreman was inducted into the International Boxing Hall of Fame in 1993.