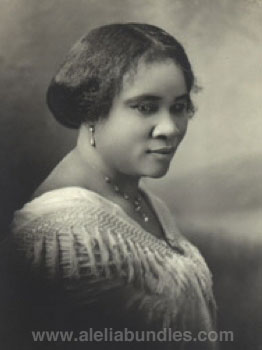 Madam C.J. Walker was born Sarah Breedlove to former slaves, Owen and Minerva Breedlove in Delta, Louisiana on December 23, 1867. Breedlove became an orphan at age seven when her parents died. Three years later, ten-year-old Sarah and her sister moved across to river to Vicksburg, Mississippi to work as maids.  By her fourteenth birthday, Sarah married Moses McWilliams of Vicksburg and three years later gave birth to her only daughter Lelia (who later changed her name to A’Lelia). Breedlove became a widow in 1887. She and her daughter moved to St. Louis to join her older brothers who were barbers. While in St. Louis she found work as a washer woman earning $1.50 per day. She also married her second husband, John Davis, in 1894. The marriage lasted nine years.

In 1905, Breedlove moved to Denver, Colorado where she sold hair care products for St. Louis businesswoman Annie Pope-Turnbo. It was in Denver that she married her third husband, newspaper sales agent Charles Joseph Walker. She also decided in Denver to found a business to manufacture and market her own hair treatment formula which she called Wonderful Hair Grower. Breedlove adopted a new professional name, Madam C.J. Walker, which she retained after her divorce from Charles Walker in 1912 and began to offer her products for sale through door-to-door agents called Madam C.J. Walker Hair Culturists. Walker also set up a training school for her sales personnel.

As the business expanded Walker relocated her operations to Indianapolis, then the largest inland shipping hub in the nation, to establish a factory for her line of beauty products. She also created a chain of beauty parlors in major cities in the United States, South America, and the Caribbean. Breedlove also set up a training school for beauticians in Pittsburgh and began to advertise and sell products by mail order.

By 1915, Madam C. J. Walker was by far the wealthiest African American woman in the nation. Walker was now invited to major gatherings of black leaders and shared the platform with notables such as Booker T. Washington and W.E.B. DuBois. Her personal triumph inspired other women and she was often invited to lecture on business and politics. During World War I the federal government enlisted her to persuade African Americans to support the war effort and to buy war bonds even as it placed her on a list of “Negro subversives” because of her advocacy on behalf of black soldiers who faced racial discrimination. Walker also spoke out on the social conditions affecting African Americans and devoted particular attention and money to the campaign to make lynching a federal crime.  Walker also donated money and time to the NAACP, the National Association of Colored Women, the YMCA, and the YWCA and provided the largest contribution for saving the home of Frederick Douglass in Washington, D.C.