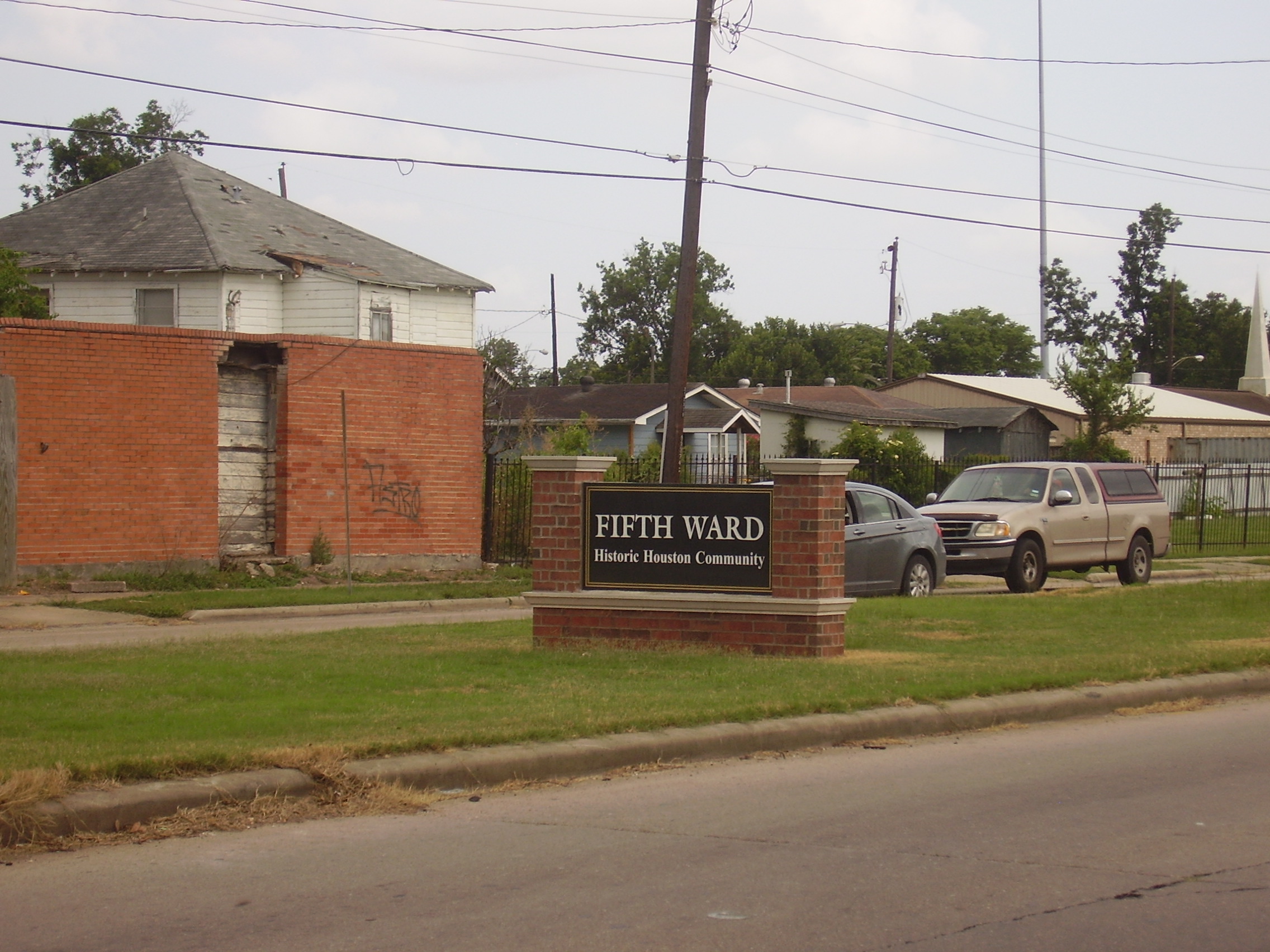 Fifth Ward is one of the six political districts created in Houston, Texas in the mid-nineteenth century. It was established in 1866. Over the years it has produced notable cultural and political figures. Located northeast of downtown, Fifth Ward lies north of the Buffalo Bayou, and east of the White Oak and Little White Oak Bayous.

Former slaves began settling in the area that became Fifth Ward in 1865 immediately following the Civil War. Although black and white residents lived in Fifth Ward in the late nineteenth and early twentieth centuries, the area by 1880 eventually became predominantly African American. Fifth Ward’s proximity to the Houston Ship Channel and railroad yards made the area attractive to black workers. By 1925, over 40 black-owned businesses lined Lyons Avenue, the main thoroughfare. Phillis Wheatley high school, built in 1927 to accommodate the growing black community, educated generations of community residents. When scholar Lorenzo J. Greene visited in 1930, he praised the school: “Wheatley High School, which for sheer artistic beauty, surpasses any colored school that I have yet seen.”

Beginning in the early 1920s, French-speaking Catholic migrants from southwestern Louisiana began moving to Fifth Ward. The enclave that became known as “Frenchtown” developed when the Southern Pacific Railroad recruited Creoles of color in 1922. The community continued to grow after the Mississippi Flood of 1927, when thousands of evacuees relocated to Houston. Bordered by Jensen Drive on its west end and Waco Street to the east, Frenchtown is home to Our Mother of Mercy Catholic church, which officially became a parish in 1930. Creole culture thrived in Frenchtown. The folklorist and historian Robert “Mack” McCormick coined the term “zydeco” during a visit to the neighborhood in 1950. Venues like the Continental Ballroom and Alfred’s Place have been central to the dissemination of zydeco music.

Fifth Ward has contributed enormously to the culture and politics of Houston. Musicians Arnett Cobb, Illinois Jacquet, Lester Williams, and Joe Sample trained in the music program at Wheatley High School. Politicians Barbara Jordan and Mickey Leland also attended Wheatley, as did former heavyweight champion George Foreman. Fifth Ward figures prominently in musical and cinematic depictions of black Houston. In the last 50 years, these portrayals have focused on the crime and vice that have gripped the community, from blues musician Weldon “Juke Boy Bonner” who warned listeners to “Stay off Lyons Avenue” in the 1960s, to rappers like the Fifth Ward Boy and the Geto Boys who chronicled violence in the area in the late twentieth century. Likewise, the films “Jason’s Lyric” and “Fifth Ward” depict the effects of the drug trade on Fifth Ward in the 1990s.