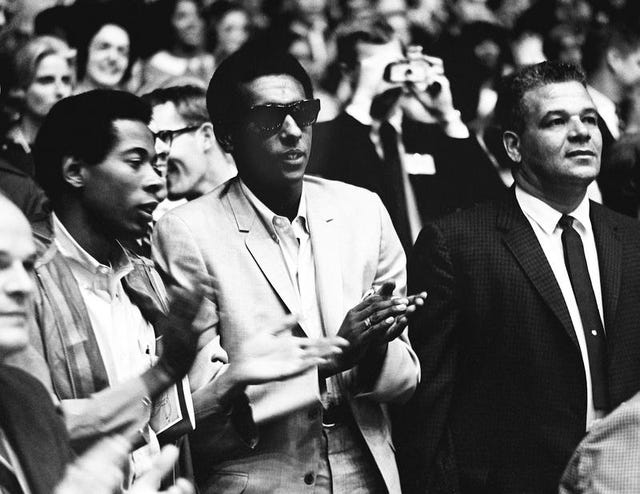 The Nashville Race Riot occurred on April 8, 1967 when African American students from Fisk University and Tennessee A&I University (Now Tennessee State University) rioted along Jefferson Street leading to many injuries and arrests as well as extensive property damage. The Nashville Race Riot was one of the many race riots that occurred in U.S. cities during the spring and summer of 1967.

On April 6, 1967, Carmichael spoke at Fisk University urging them to become involved in the growing Black Power Movement. The next day, Carmichael spoke to the Tennessee A&I University students at Kean Hall where he encouraged the students there to organize and take economic control of the African American community in Nashville which he claimed was one of the goals of the Black Power Movement.

On April 8, 1967, Carmichael gave a similar speech at Vanderbilt University. Later that evening, a riot erupted around North Nashville where Fisk University, Tennessee State University, and Meharry Medical College were located. The riot started when a black manager of the University Inn, a Jefferson Street restaurant, called the police to remove a drunken, disruptive solider from the establishment. Once the police arrived and removed the solider, Fisk University and Tennessee A&I students started an impromptu picket line around the University Inn.

More police were called to the scene and this time they were met by students throwing rocks at them and at passing cars along Jefferson Street. By the end of that day, April 8, fourteen people were injured including an eighteen-year-old man who was shot in the leg. The riots continued the following day at Tennessee A&I University where Molotov cocktails were thrown through the windows of several businesses including a liquor store, a gas station, and a barbershop. At least a dozen people were injured, including a Tennessee A&I student who was shot in the neck, but fortunately no one was killed. An estimated 40 people were arrested during the second day of the riot.

On April 10, 1967, Nashville Mayor Beverly Briley called for an end to the violence and greatly increased the police presence in the area. Mayor Briley also blamed Carmichael for causing the riot even as he and other Nashville civic and political leaders ignored both the poor condition of the black neighborhoods in North Nashville and the longstanding resentment against the Nashville police by black residents. Regardless of the actual factors causing the riot, it ended on that day, April 10.