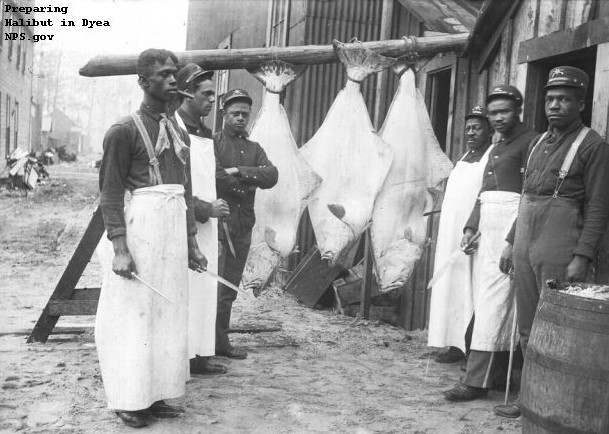 In May of 1899 the United States Army sent Buffalo Soldiers, the black soldiers of Company L of the 24th Infantry, to Dyea, Alaska Territory. The Klondike Gold Rush had brought hordes of gold rushers up the Lynn Canal to the tiny ports at Dyea and Skagway. The two lawless boomtowns sprang out of nowhere, and the Army sent troops to bring order.

The Army had formed segregated regiments of black soldiers, most of them former slaves in 1866, after the Civil War. Through the rest of the century these regiments, including the 24th, served in the American West, building towns, fighting Indians, protecting roads and railroads.

In 1898 the soldiers of the 24th went with the U.S. Expeditionary Force to Cuba to fight in the Spanish-American War. Among other things, they charged up San Juan Hill with future U.S. President Theodore “Teddy” Roosevelt, and they returned home at the end of the year as heroes to many but not all Americans.

The next spring, in May of 1899, the Army dispatched Company L of the 24th to Dyea. One hundred twelve Buffalo Soldiers boarded the S.S. Humboldt at a Seattle (Washington) dock and headed up the North Pacific through the inside passage. Forty-six of them stopped at Fort Wrangell in Southern Alaska. The rest sailed on to Dyea.

The great gold rush, already petering out by 1899, had left Dyea in bad shape, but that didn’t matter much to the Buffalo Soldiers because in July a fierce forest fire swept through; burned Dyea and its military camp to the ground. Company L relocated to nearby Skagway. Initially they pitched tents, eventually they constructed a two-story barracks.

Unlike Dyea, Skagway survived the end of the Gold Rush. While much of the boomtown turned into a ghost town, a small, one of a kind, community chose to stay. The Army no longer needed Buffalo Soldiers to keep order, but Company L remained in place to keep a military presence along the border that the United States and Canada still disputed.

At the turn of the century, Jim Crow, an elaborate system of laws and rules that absolutely segregated black from white and absolutely established white dominance, prevailed in much of the United States. Things were very different in Alaska Territory. In Skagway Buffalo Soldiers joined the Baptist Church, formed a “colored” Sunday school, a singing quartet and an instrumental quartet.
The soldiers formed a baseball team that competed against two other teams in Skagway and teams from two nearby towns, Bennett and Juneau.

In May 1902 the Buffalo Soldiers climbed aboard the S.S. City of Seattle and sailed back to Seattle.