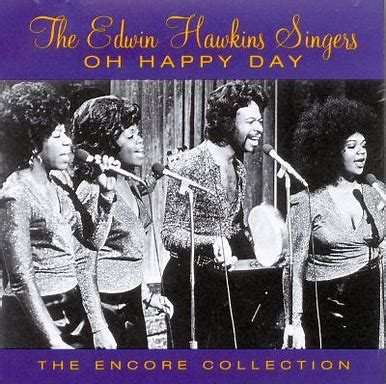 In 1967, Edwin Reuben Hawkins, who was born on August 19, 1943, in Oakland, California and had been playing the piano at the age of five and accompanying the Hawkins family gospel group since he was seven, joined his church pianist and soprano, Betty Watson of the Ephesian Church of God in Christ in Berkeley, California, to consider the possibility of creating a powerful chorale ensemble to promote gospel music. After weeks of discussions and research, the two musicians invited the best choirs in the San Francisco Bay Area to meet with them.

Ultimately the Northern California State Youth Choir, a community gospel choir formed in May 1968 and which included 47 young men and women in their late teens and early twenties, was recruited to this project. The Choir led by Hawkins and Watson, produced a Rhythm and Blues infused gospel album on the Pavilion label titled, Let Us Go into the House of the Lord (1968).  The album which was recorded at Ephesian Church of God in Christ, included eight songs.  One of those songs, “Oh Happy Day” exploded in popularity after it was released as a single in 1969.  In less than a year 900,000 copies of the single had sold, sparked in part by the choir performing on the popular dance show, American Bandstand, giving it national exposure. Quickly following on the heels of that success was the gospel group’s first Grammy in 1970 for best Soul Gospel Performance.

While the national exposure clearly helped, “Oh Happy Day” began to get airplay not only on local religious radio but on secular  stations as dee jays embraced this 18th-century Protestant hymn rearranged by Hawkins and Watson to appeal to a contemporary audience. The stations played the song three or four times a day in their otherwise pop and R&B rotations. With this exposure, “Oh Happy Day” became the most successful gospel hit of all time, selling more than seven million units worldwide. Its remarkable international appeal was clearly part of that success.  While the song rose to No. 4 on the U.S. Pop Chart, it reached No. 1 on the German, French, and Swiss Singles Charts and No. 2 on the Canadian, United Kingdom, and Irish Singles Charts. Eventually the Choir toured throughout Europe and the United States, even appearing for five weeks at Caesars Palace in Las Vegas.

The Edwin Hawkins Singers continued recording albums, mainly on Gospel/Christian labels like Birthright and Myrrh and in 1972 they were awarded a second Grammy for “Every Man Wants to Be Free,” followed by a third Grammy in 1980 for the song “Wonderful.” In 1982 the Edwin Hawkins Music and Arts Seminar was founded, and a fourth Grammy was awarded in 1983 for the song “If You Love Me.” In 2007, Edwin Hawkins was inducted into the Christian Music Hall of Fame.

Edwin Reuben Hawkins, the patriarch of the Edwin Hawkins Singers, died on January 15, 2018, in Pleasanton, California, at the age of 74. He and the ensemble revolutionized the evolving genre of gospel music.