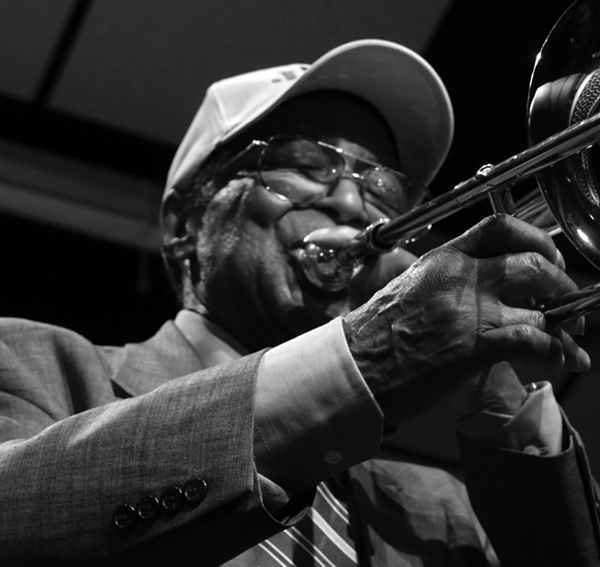 Curtis DuBois Fuller was a renowned Jazz trombonist whose career spanned over 68 years as a musician, composer, and educator. His musical genre was steeped in hard-bop jazz with the driving force of blues and gospel. Curtis DuBois Fuller was born on December 15, 1932 in Detroit, Michigan. He was the son of a Jamaican immigrant, John Fuller, who died before Curtis was born, and Antoinette (Heath) who died when he was 9 years old, he spent several years at the Children’s Aid Society, a Detroit orphanage run by Jesuits. His passion for music came about when one of the nuns took him to a performance of the Illinois Jacquet band which featured J.J. Johnson on trombone.

Fuller attended Cass Tech High School in his hometown of Detroit, together with Paul Chambers, Donald Byrd, Tommy Flanagan, Thad Jones, and Milt Jackson, all of whom became giants in Jazz. His first instrument of choice was the violin and his second choice was the saxophone, neither of which were available, prompting Fuller to take up the trombone at age sixteen.

In 1953, Fuller was drafted into the US Army (Korean War) and served until 1955 along with future Jazz greats the Adderley brothers, Cannonball and Nat, and Paul Chambers. They played in the last of the all-Black military bands. After his military service, he joined the quintet of Yusef Lateef. Fuller played a brief time with Miles Davis in the late 1950s when he was then signed by Alfred Horn to record with Blue Note Records as a sideman for Sonny Clark, John Coltrane, Bud Powell, Jimmy Smith, Wayne Shorter, Lee Morgan, and Joe Henderson.

In 1960 Fuller became the first trombonist of the Art Farmer-Benny Golson Jazztet, and later he was a member of Art Blakey’s Jazz Messengers from 1961 until 1965. In the late 1960s, Fuller joined Dizzy Gillespie’s band and toured with Count Basie before reuniting with Blakey and Golson.

As a tribute to his late wife, Catherine Rose Driscoll, whom he married in 1980, Fuller recorded his album, The Story of Cathy and Me (2011). Together they had three children: Paul, Mary, and Anthony Fuller; and five children from a previous marriage to Judith Patterson : Ronald, Darryl, Gerald, Dellaney, and Wellington.

As a music educator, Fuller was granted the honorary Doctor of Music degree from Berklee College of Music in 1999. In 2007 he was honored as a NEA Jazz Master. He also served as a faculty member of the New York State Summer School of the Arts School of Jazz Studies.