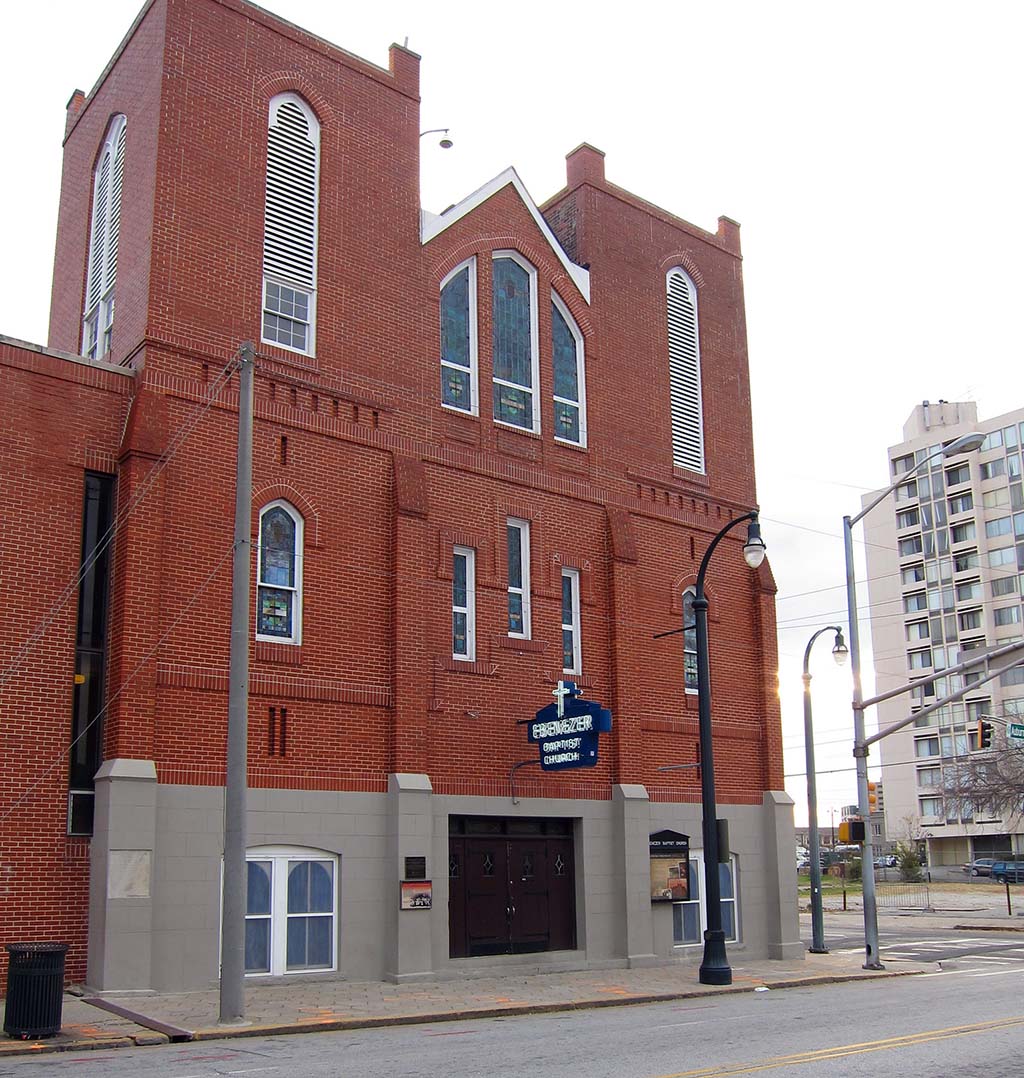 Founded in 1886 by Pastor John Andrew Parker, a freedman, Ebenezer Baptist Church of Atlanta, Georgia had only 13 members and no church building upon Parker’s passing in 1894 and when Alfred Daniel Williams became its second pastor.  Williams’ powerful sermons and strong leadership skills increased the number of congregants to 750 by 1913. Inspired by a life-long desire to preach the word of God and a conversion experience, Williams’ devotion to purpose enabled him to secure a lot on the corner of Auburn Avenue and Jackson Street in Atlanta and raise $25,000 for a building that included an auditorium and gallery that could seat 1,250 people. The church broke ground for the new building in March 1914.  Upon Pastor Williams’ passing in 1931, Reverend Martin Luther King, Sr., husband of Alberta, Pastor Williams’ daughter, assumed the mantle of leadership at Ebenezer.

Pastor King led the church while his wife, Alberta Williams King, directed the music ministry. Their son, Martin, Jr., grew up in this nurturing Christian environment. He preached his first sermon at the church in 1948, when he was 19 and was ordained a minister soon thereafter. Some of Dr. Martin Luther King, Jr’s most durable sermons were delivered at Ebenezer, among them ‘‘The Dimensions of a Complete Life,’’ ‘‘What Is Man?’’ and ‘‘Loving Your Enemies.’’

When the younger King completed his doctoral study at Boston (Massachusetts) University School of Theology in 1954, he accepted a pastorate at Dexter Avenue Baptist Church in Montgomery, Alabama.  Ebenezer Baptist Church members attended his installation service in large numbers. He rejoined his father at Ebenezer as co-pastor and served from 1960 until 1968 when he was assassinated. His brother, A. D. Williams King, served as co-pastor after the assassination. “Daddy” King, as Rev. Martin Luther King, Sr., was known, continued in that capacity until his passing in 1975.

In 1980, the Martin Luther King, Jr., National Historic Site was established.  The site is composed of several buildings located around the King home on Auburn Avenue in Atlanta’s historic Sweet Auburn district.  Among these structures, the original Ebenezer Baptist Church edifice figures prominently as a heritage site and plays an important part in explorations of Dr. King’s life and accomplishments. The site is set on 35 acres.  There is a visitor center with an American civil rights movement museum which illustrates the path followed by Dr. Martin Luther King, Jr.  There is an “I Have a Dream” International World Peace Rose Garden and memorial in honor of Mohandas K. Gandhi.  The “International Civil Rights Walk of Fame” honors those whose sacrifices contributed to making equality a reality for all.  The center is a focal point during Martin Luther King, Jr., Day events and Black History Month celebrations.

Today, Ebenezer Baptist, with a congregation of 6,000, continues to serve the Atlanta community from its new facility in the King Historic Site under the direction of Reverend Dr. Raphael G. Warnock.  Dr. Warnock previously served as Assistant Pastor of Abyssinian Baptist Church of New York City and as the Senior Pastor of Baltimore, Maryland’s Douglas Memorial Community Church.  He is only the fifth minister to lead the Ebenezer congregation and has served in that capacity since 2005.