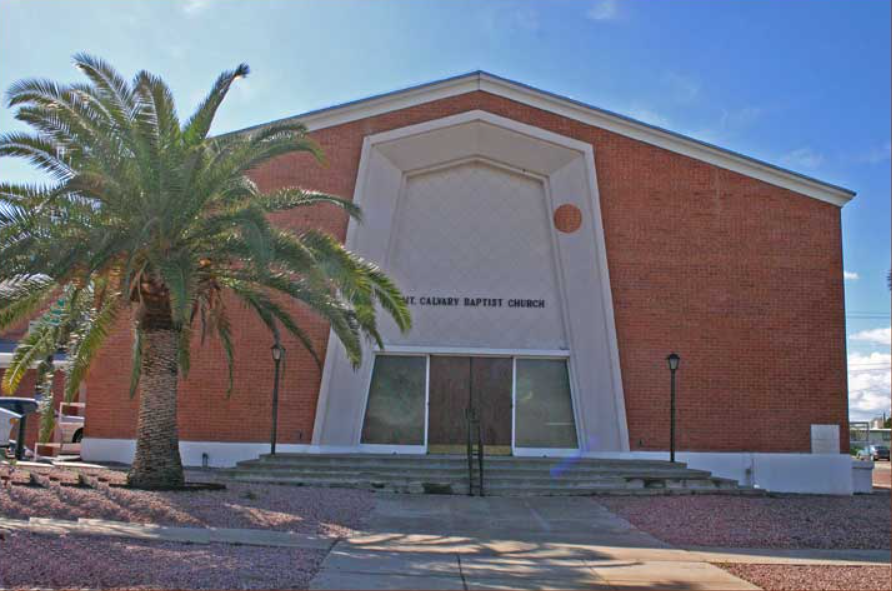 Mt. Calvary Missionary Baptist Church began its ministry to the black community of Tucson, Arizona in 1900 when Baptist missionary Rev. John B. Bell arrived, conducted services, and with ten other devoted men and women organized the Baptist Mission. Rev. Bell was part of a longstanding effort by the Baptists to organize African American churches throughout the nation.

Originally using space downtown near the railroad depot, by 1910 the church adopted its present name and built an edifice at 10th Avenue and Fourth Street. By 1933 Tucson’s black population was about 1,000, or 3.3% of the city’s residents, and Mt. Calvary’s congregation of 200 represented 20% of the total African American community. Through the first half of the 20th century when Tucson was racially segregated, Mt. Calvary played a key role in the community, proving not only religious services and organizational leadership for black Tucsonians but also activities for youth and civic engagement around local social issues for adults.

By 1946 there were ten African American churches in Tucson, with a total membership of 1,700 or over 60% of the black population. Mt. Calvary remained the largest. In 1956 Mount Calvary relocated to a new and larger building at 210 E. Lester Street, where it remains today.

Beginning in the 1960s the local civil rights movement challenged religious and education segregation in Tucson.  As a consequence Mt. Calvary lost some of its members to other churches.  By the early 1990s the church transformed itself.  While still serving its core members, it began an outreach ministry to maintain its youth and attract more young people.

In 2000, Mount Calvary celebrated its centennial year. Five years later it had over 500 members coming from across Tucson, not just the immediate area as in previous years. Tucson’s military and engineering facilities attracted people of various races from across the nation and Mt. Calvary welcomed them into its congregation.

In 2010 Mt. Calvary choose Pastor LaBryant Friend as their new leader. Pastor Friend, who has a Master of Divinity degree from Oral Roberts University, and states as his two greatest passions ministering to families and youth, making the Word of God applicable to the life of every listener.  Mount Calvary participates in active outreach through social media on the internet, live radio broadcasts, welcoming and nourishing every opportunity to meet the community.