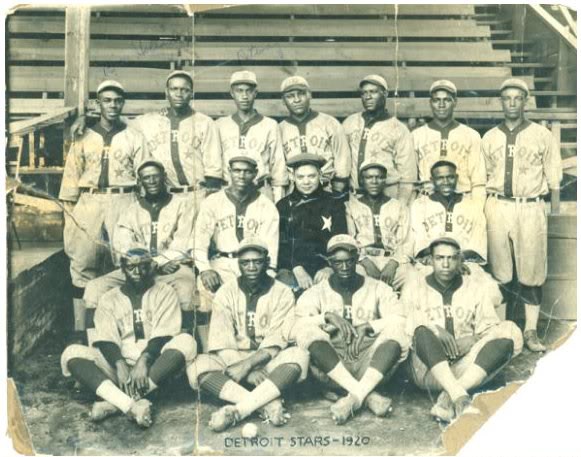 The Detroit Stars were a Negro League baseball team founded in 1919 by Rube Foster, owner of the Chicago American Giants. They were co-owned by Tenny Blount. Their first season was played as an independent team, not affiliated with any league, and their first game was on Easter Sunday, April 20, 1919, at Mack Park in Detroit. The Detroit Stars defeated the white city champions, the Maxwell Internationals, in front of a crowd of 3,500 people.

In 1920, the team became charter members of the Negro National League, along with seven other teams. Foster transferred several of his team veterans to the Stars, including catcher Bruce Petway and player/ manager Pete Hill. He also signed Edgar Wesley, John Donaldson, Dicta Johnson, José Méndez, Frank Wickware, and Jimmie Lyons. The team placed second in the league in 1920 with a 35-23 record.

The 1921 season was the worst for the Stars in their twelve seasons. They came in at seventh place, next to last in the league, with a 38-46 record. Player Bruce Petway took over as manager in the 1922 season, remaining in the position until 1925. Throughout the 1920’s, center fielder Norman “Turkey” Stearnes, pitchers Andy Cooper and Bill Holland, and first baseman Edgar Wesley all remained with the team. Future Hall of Fame inductees Ted “Double Duty” Radcliffe, Bingo DeMoss, and Cristobal Torriente joined the team in the mid 1920’s. The Negro National League collapsed at the end of 1931, and the Detroit Stars disbanded.