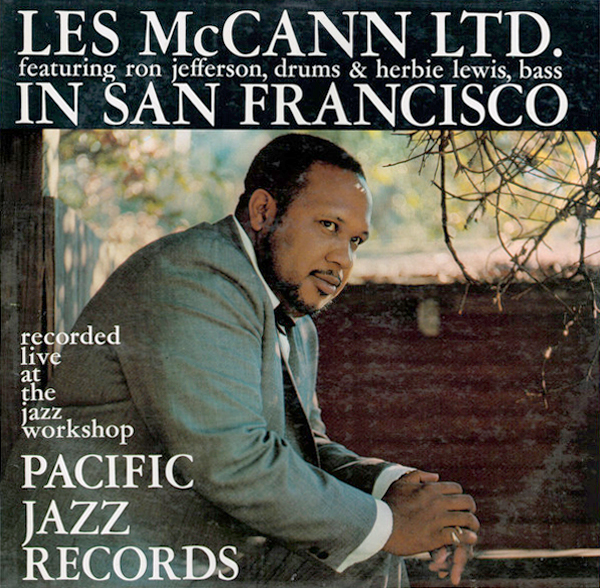 In 1956, the self-taught pianist McCann, played and sang in school bands and in the U.S. Navy which he joined in 1956 in San Diego, California and where a talent contest won him a spot on the Ed Sullivan Show. Moving to Northern California in the late 1950s, he played with Gene McDaniels before forming a successful trio (Benny Bailey, Eddie Harris, and McCann) with which he first recorded in 1960. McCann’s primary career began in the early 1960s when he recorded as a pianist with his trio for Pacific Jazz Records. His instrumental, “The Shampoo,” was a number one hit in 1963. His musical flavor was dance-based rhythms of R&B, gospel, and funk. He was among the first jazz musicians to include electric piano, clavinet, and synthesizer in his music.

The year 1969 saw Atlantic Records release the album, Swiss Movement, which included McCann, frequent collaborator, saxophonist Eddie Harris, and guest trumpeter, Benny Bailey. The song was performed at that year’s Montreux Jazz Festival in Geneva, Switzerland. The album included “Compared to what,” and both the album and the single were major Billboard pop chart successes, peaking #35 on the R&B Charts. “Compared to what” featured political criticism of the Vietnam War, then increasingly unpopular with the American people. McCann did not write the song; fellow Atlantic composer/artist Eugene McDaniels registered it years earlier. However, he did popularize it.

McCann reached the peak of his popularity at Montreux with his performance of “Compared to What” and “Cold Duck Time” on the Swiss Movement album. From that point, McCann concentrated more on his voice as his principal instrument even though he continued displaying impeccable piano skills.

In 1971, McCann became part of a group of soul, R&B, and rock performers, including Tina Turner, Santana, and Wilson Pickett, for a unique film project in Accra, Ghana.  They performed a remarkable 14-hour concert for over 100,000 Ghanaians throughout the city and on the campus of the University of Ghana at Legon. This concert was recorded for the documentary film Soul to Soul which was released in August 1971.

Les McCann was stricken with a stroke that left him partially paralyzed in 1995. However, he continued recording and performing. In 2015, The University of Kentucky bestowed upon McCann an honorary doctorate for his creativity and addition to the vast body of knowledge about popular music.  composer