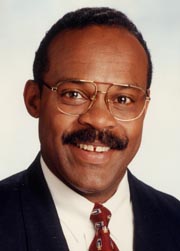 Born in Brooklyn, New York, Maryland politician Wayne Keith Curry’s father, Eugene, was a schoolteacher and his mother, Juliette, was a homemaker and later a secretary.  When the family moved to Cheverly, Maryland in the 1960s, they encountered various forms of discrimination, including exclusion from a white neighborhood, prompting his mother to campaign for open housing.  Curry graduated from Bladensburg High School in 1968, and Western Maryland College where he earned his B.A. in 1972.  While at Western Maryland he was elected senior class president.  After a brief teaching career Curry started working in the office of County Executive of Prince George’s County in 1975.  Within five years he rose from an office staffer to senior assistant to the county executive, during which time he earned a law degree from the University of Maryland, graduating with honors.

From 1980 to 1994 Curry practiced law in the fields of business and health care, and chaired several voluntary community committees.  In 1994 he became the first African American elected to the office of County Executive in the state of Maryland, serving two consecutive terms, from 1994 to 1998, and from 1998 to 2002.

Over the past century and a half, the County has undergone dramatic demographic changes.  In 1860, on the eve of the Civil War, 60% of the population was black, most of who were enslaved.  In the years following the Civil War, the white population became the majority and remained so until the 1960s, when suburban migration from the adjacent District of Columbia, swung the population back to majority African American.  But this time, the black inhabitants were some of the wealthiest African Americans in the nation.  Despite the County’s huge upper middle class black population, there still remain a significant number of at-risk people, reflected in underachievement in the public schools and crime rates that exceed the state average.

Curry’s record as County Executive is generally viewed very favorably, and despite some criticism on education and crime issues, he earned high praise from Wall Street investors for his financial management.  Inheriting a deficit from his predecessor, Parris N. Glendening of $107 million, he left office with a surplus of $114 million.  In recent years he has been openly critical of his successor, Jack Johnson, whom he has accused of failing to drive a sufficiently hard bargain with the developers of a new waterfront property along the Potomac River.