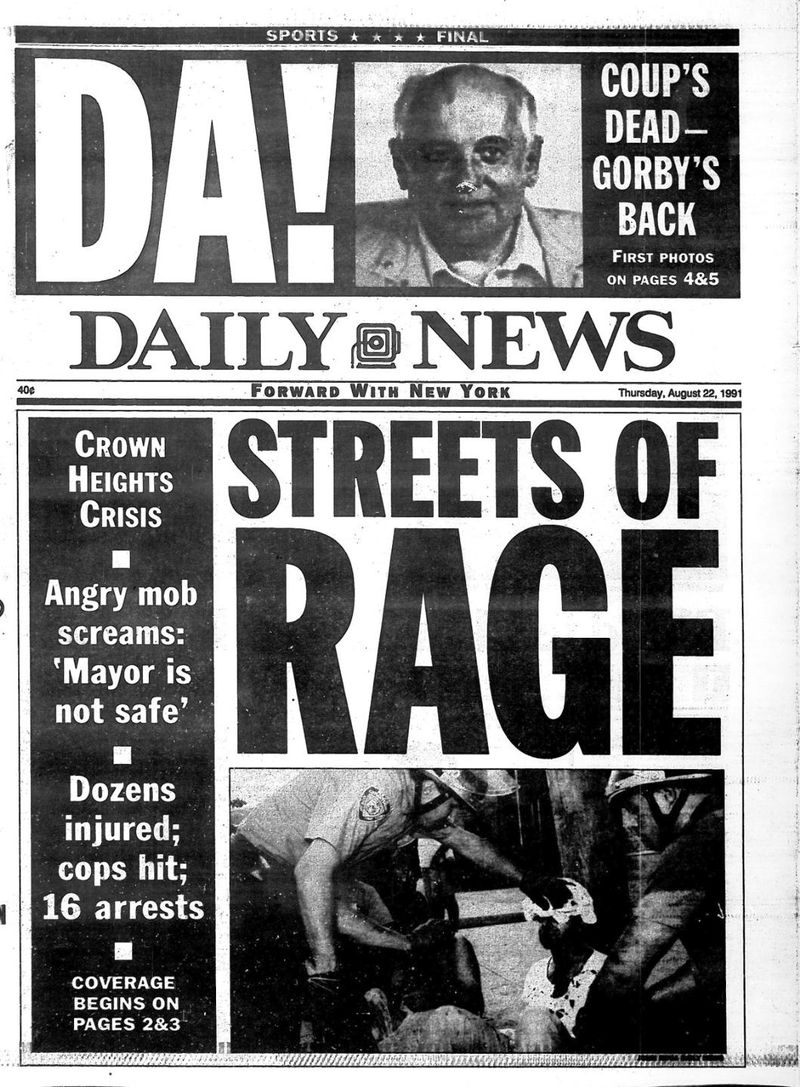 On August 19, 1991, two African American cousins named Gavin and Angela Cato were playing in the streets of Brooklyn, New York.  As Gavin went to adjust his bike lock, an Orthodox Jewish driver named Yosefl Lifsch, who was part of a motorcade for notable Rabbi Menachen M. Schneerson, swerved onto the sidewalk. Lifsch struck the cousins, killing Gavin, and seriously injuring Angela. Although it was later debunked, rumors spread that Lifsch was drunk, and that the death was deliberate.

Within a few hours, a group of black youths stabbed a visiting Orthodox Jew from Australia named Yankel Rosenbaum. While Rosenbaum had nothing to do with the Gavin Cato death, it was seen as an apparent retaliation to it. Rosenbaum initially survived the wounds, with Mayor David Dinkins consoling him at the Kings County Hospital the next day. However, hours after the Mayor’s visit Rosenbaum died from his bleeding in an undetected wound.

The background of Black-Jewish relations in the Crown Heights neighborhood of Brooklyn had long preceded the riot. As a majority black neighborhood with a large Hasidic Jewish population, black residents had voiced resentment that Jews had received special protections from law enforcement due to a police redistricting decision in 1976. Many blacks were also frustrated because they believed the Jewish minority had exploited black political leadership, largely taking advantage of a lack of unity among blacks at the time.

Violence continued from August 19 (the night of the attack on Rosenbaum) until August 23.  Groups of rioters destroyed numerous homes, businesses, and vehicles throughout the neighborhood. Hundreds of police officers would be called in to suppress the riot, however, many rioters and police would be injured during the ensuing violence. A few months later, a state investigation concluded that a slow response and miscalculation of the tensions by law enforcement enabled the riot.

On the third day of the riot, a group of black protesters who were part of an Al Sharpton-led march pulled away from a preplanned route. They burned an Israeli flag outside the building of a local Orthodox Jewish organization.  Sharpton himself received criticism when he spoke at Gavin Cato’s eulogy, referring to the Jews as “diamond merchants,” and comparing the Crown Heights neighborhood to apartheid South Africa.

After the riots, legal actions were taken against Lemrick Nelson Jr., a black sixteen-year old who was charged with assaulting Rosenbaum. Police had found a knife on Nelson that they had identified as the one used on Rosenbaum. However, on October 29, 1992, Nelson was acquitted by a state court for the murder of Rosenbaum, much to the disappointment of many in the local Jewish community.

While the riots lasted only a few days, they held serious political ramifications in New York City.  Mayor Dinkins, the city’s first black mayor, would lose in the 1993 election to Republican Rudy Giuliani.  Giuliani’s campaign criticized Dinkins by asserting that he supported Black Nationalism, and had enabled an ethnic “pogrom” by allowing rioters to roam in the street. Giuliani would later become nationally known for his role as mayor during the September 11, 2001 World Trade Center terrorist attack in New York City.