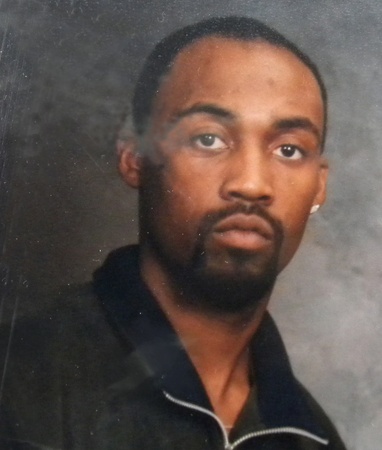 Derrick Jones was an East Oakland, California barber who was shot and killedby officers of the Oakland Police Department on November 8, 2010. He was 37 years old at the time of his death. His death, along with those of many others including the well-known killings of Trayvon Martin, Michael Brown, Tamir Rice, and the death in custody of Sandra Bland, helped spur the rise of the Black Lives Matter Movement across the United States.

Derrick Jones was born in Oakland in 1983 (although the specific date is unknown) to parents Nellie and Frank Jones.  At the time of his death he was married to Lanell Monique Jones and the couple had a two-year-old daughter, Demi.  Jones was the owner of Kwik Cuts Barbershop in Oakland which was a well-known gathering place for members of the local community. He was also a member of the Church of Christ in Oakland.

On the night of November 8, 2010, Oakland police responded to a call regarding a domestic dispute between Jones and a woman at a nearby laundromat on Bancroft Avenue.  Two police officers who responded to the call, Omar Daza-Quiroz and Ereiberto Perez-Angeles, claimed that when they arrived on the scene, they saw Jones running away.  When he ignored commands to stop, they fired their Tasers but were unable to subdue him. They then claimed that as the chase continued, Jones reached to his pocket and as he attempted to turn towards the police, they started shooting upon seeing a shiny metal object in his hand. Jones was shot five times and died immediately from the wounds.  An autopsy reveals he was shot several times in the front of his body and at least twice through his upper body. The metal object that was the focus of the officer’s attention was later found to be a small metal scale. Jones was the third unarmed person of color killed by police in Oakland in 2010.

Although Officers Daza-Quiroz and Perez-Angeles had a history of excessive use of force, the Alameda County District Attorney’s office in 2011 decided not to bring charges against them. The office held that the officers in this instance were responding appropriately because they were in fact in danger.

Jones’s case occurred in close proximity to the murder of Oscar Grant by BART Police Officer Johannes Mehserle and was another catalyst for protest and community unrest.  Deeming his death unjustified, the National Association for the Advancement of Colored People (NAACP) called for a fair and thorough investigation, and the Federal Bureau of Investigations (FBI) was called in to work on the case.

In 2011, Joness’ widow Lanell Monique Jones sought $10 million in a lawsuit for the death of her husband but the case never went to court.  In February 2013, the Oakland City Council paid a settlement of $225,000 to Jones’s parents, Nellie and Frank Jones, as well as his daughter Demi Jones, who was two years old at the time of her father’s death.