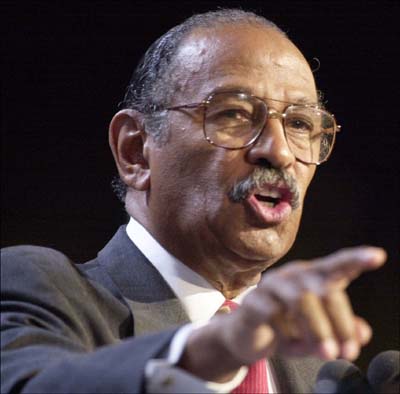 John Conyers Jr., who served in the U.S. Congress fifty-years (from 1965 to 2017), was born on May 16, 1929 in Detroit, Michigan.  He attended public schools and graduated in 1947 from Northwestern High School.  After high school, he followed in his father’s footsteps and joined the United Automobile Workers Union (UAW).  Conyers worked for the Lincoln Car Factory, where he became a director of education for the UAW Local 900.

Conyers enlisted in the United States Army in August 1950 and became a second lieutenant in the Corps of Engineers.  He was discharged from the army in 1954 after seeing combat in the Korean War.

Conyers returned to Wayne Sate University where he received his Bachelor’s of Arts in 1957 and Bachelor of Laws in 1958 from Wayne State University’s School of Law in 1958.  After passing the bar in 1959, Conyers began practicing law in his hometown, Detroit, Michigan.  At age 61, Conyers married Monica Esters, a former staffer, and the couple had two children, John III, and Carl Edward.

His brief stint in private practice was interrupted in 1958 when Conyers he became a legislative assistant to Fifteenth District Michigan Congressman John Dingell, Jr.  Conyers worked for Dingell until 1961 and then became a referee for the Michigan Workmen’s Compensation Department.  With the support of Congressman Dingell, 35-year-old John Conyers was elected to the United States Congress in 1964, representing Michigan’s Fourteenth Congressional District.

In 1971, Conyers was one of the thirteen founders of the Congressional Black Caucus.  In 1974, he was a member of the House of Representatives Judiciary Committee that brought charges against President Richard Nixon.  In 1983, he also introduced the legislation that created the Dr. Martin Luther King national holiday. He also introduced legislation that began a review of the possibility of reparations for African Americans because of slavery and state-sponsored racial discrimination. Over the years when Democrats controlled the House of Representatives, he chaired the House Judiciary Committee.

Toward the latter part of his career, Conyers was plagued by scandal.  On June 26, 2009, Monica Conyers pleaded guilty to a bribery charge and spent twenty-seven months at Alderson Federal Prison Camp.

In November 2017, Conyers was accused of sexually harassing female members of his staff and then using public funds to reach a settlement with them.  Pressure mounted on him to resign or possibly be ousted from Congress.  Conyers resigned on December 5, 2017 and announced his endorsement of his son John Conyers III to replace him in Congress. The younger Conyers stepped aside for Ian Conyers, the congressman’s great nephew, but he and two other candidates were defeated in the August 2018 Democratic primary by Rashida Tlaib who went on to win the general election on November 6 to become the first Palestinian-American in Congress. John Conyers served in Congress for fifty-two years, longer than any other African American Representative.

Congressman Conyers died of natural causes at his home in Detroit on October 27, 2019. He was 90 years old. He is survived by his wife, Monica, and their two sons, John and Carl.