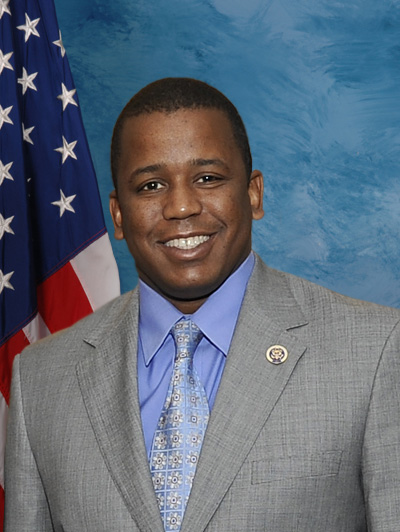 Kendrick Meek, former highway patrolman, Florida state representative, and state senator, served in the United States House of Representatives as a Democratic representative from Florida’s 17th District from 2003 to 2011.

Meek was born on September 6, 1966 in Miami, Florida. He is the youngest of three children of Harold and former U.S. Representative Carrie Meek, who also represented Florida’s 17th District before her son took over her position. Meek worked his way through high school and attended Florida A&M University on a football scholarship. He graduated in 1989 with a degree in science. After graduating, Meek joined the Florida Highway Patrol. During his four-year career with the Florida Highway Patrol, Meek became the first African American to reach the rank of Captain.

In 1994, Meek ran for the state legislature, and won when his opponent, State Representative Elaine Gordon dropped out for health reasons. Four years later, Meek easily won reelection. While in the Florida House, Meek worked with Republicans in order to provide compensation for two African Americans who had been falsely convicted for murder 35 years earlier. During his four years in the state Senate (1998-2002) Meek found himself embroiled in the national debate over the issue of affirmative action. Florida Governor Jeb Bush put forward a new program called One Florida, which would discontinue the use of affirmative action in favor of college entrance admission guarantees to the top 20% of each public high school’s graduating class. Meek and others staged a sit in protest in Bush’s office, which lasted for 25 hours.  The Supreme Court upheld the legality of affirmative action in Florida in 2003.

In 2002, Carrie Meek announced her retirement from the U.S. House and Meek easily claimed victory in the election to replace her. Meek supports same-sex marriages, an increase of minimum wage, human embryonic stem cell research, and abortion. He voted “no” on declaring war in Iraq with no exit date.

In 2010, Meek was the Democratic nominee in the U.S. Senate election for the seat of Mel Martinez, but he lost in a three-way race to Republican Marco Rubio. After his defeat, he continued to serve in the U.S. House of Representatives for Florida’s 17th district until 2011. He was succeeded by Frederica Wilson. Meek worked for nine years selling security contracts for Wackenhut Corp., a company which in later years also employed his wife and mother as lobbyists. Meek worked at Wackenhut the entire time he served in the Florida state legislature and senate, drawing criticism when he did not recuse himself from votes that would affect his employer’s bottom line.

Meek is a member of the 100 Black Men organization which focuses on empowering African American teens and children through education; he is also a lifetime member of the National Association for the Advancement of Colored People (NAACP). Meek was appointed Special Representative to the United Nations by President Obama. He most recently became “Senior adviser” at the law/lobbying firm King & Spaulding.