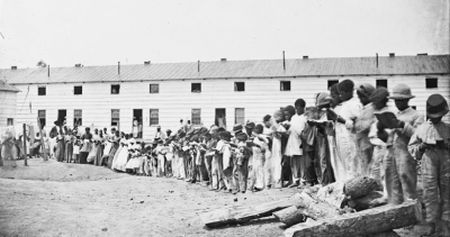 In the article below Jill L. Newmark, exhibition specialist in the History of Medicine Division of the National Library of Medicine, National Institutes of Health (NIH) in Bethesda, Maryland, describes thefirst hospital sponsored by the United States government specifically to meet the health care needs of the ex-slaves during the Civil War.  The Contraband Hospital as it was called, eventually became the Howard University Hospital in 1975.

On a parcel of swampy land in northwest Washington, D.C. bounded by 12th, 13th, R and S Streets N.W., a tented camp and hospital once stood that served thousands of escaped slaves and black soldiers during the American Civil War.  Known as Contraband Camp, it contained one of the few hospitals that treated blacks in Washington, D.C. during the war and whose staff, including nurses and surgeons, were largely African American.

Over 40,000 escaped slaves sought refuge and freedom in Washington, D.C. after the passage of the D.C. Emancipation Act of 1862 freeing all enslaved persons in the District of Columbia.  As the Union Army advanced on southern strongholds, thousands of African Americans made their way across Union lines, becoming what was known as “contraband.”  The increasing numbers of contraband coming into Washington created a dilemma for the Federal Government and the Union Army responsible for both the protection of the capital and the pursuit of victory over the Confederates.  How would these African American men, women, and children find food, shelter, and medical care?  In an effort to meet this challenge, the Union Army established a camp and hospital to serve them. It became a safe haven for these former slaves and a center of government sponsored contraband relief efforts in Washington, D.C.

Contraband Camp and Hospital were constructed as one-story frame buildings and tented structures built by the Union Army to serve as temporary housing and hospital wards for black civilians and soldiers.  Separate wards for men and women were established as well as separate tented wards for smallpox patients. In addition to the hospital wards, there was a stable, commissary, dead house (morgue), ice room, kitchen, laundry, dispensary, and living quarters. Within the camp thousands of contraband found refuge and medical care, and by the end of 1863, they had processed over 15,000 individuals and had 685 residents.

Living conditions at the camp were poor and unhealthy. The damp and swampy ground on which the camp was built along with a lack of an adequate supply of fresh water and the limited distribution of meager supplies contributed to the camp’s conditions.  Residents lived in small rooms and tents occupied by 12 to 14 people where they cooked, ate and slept, and invariably contracted diseases and illnesses from the overcrowded conditions. Tents had only wooden planks laid on the ground for beds and the tents themselves were often ripped and torn leaving little protection from the wind, rain and snow.  Residents’ clothing and bedding were often soaked through after a heavy rain.  Many tents were without stoves for heat, and supplies of blankets, stoves and other rationed goods were often denied residents by the camp superintendent.  Clean water was also in short supply as the camp’s only source of water was a well that was dry much of the time. Hospital surgeons were well aware of the water’s contribution to illness among camp residents, but were limited in their ability to make improvements. The damp environment combined with a lack of an adequate supply of fresh water created a breeding ground for illnesses at the camp such as diarrhea and respiratory infections.

Contraband Hospital’s staff was a mix of commissioned military personnel, civilians, and volunteer relief workers. The staff always included at least two surgeons, four to six nurses and several clerks, stewards and matrons. They provided critical support for patient care and administration for the overall operation of the hospital.  When the hospital was first established in 1862, most cooks, laundresses, and nurses were black while the majority of those in positions of authority, such as surgeons and head nurses, were white.

The appointment of the first African American surgeon-in-charge, Alexander T. Augusta, in May 1863 began a shift in the racial makeup of hospital staff with blacks taking over leadership positions from whites.  African American surgeons and assistant surgeons were commissioned military officers or private physicians under contract with the army, and their appointments represented the first time blacks served in positions of authority at a hospital in the United States.  These doctors included Alexander T. Augusta, Anderson R. Abbott, John H. Rapier, Jr., William P. Powell, Jr., William B. Ellis, Charles B. Purvis, and Alpheus W. Tucker.  The appointment of black surgeons to the hospital was based primarily on race as federal records documenting the work assignments of these surgeons indicate duty stations at facilities treating only African Americans.  No black surgeons were assigned to white-only hospitals.

Nurses at Contraband Camp hospital were primarily made up of residents of the camp. With over 25 hospitals in the Washington, D.C. area, the capital city had the greatest bed capacity of any other city in the Union as well as the greatest need for nurses and other workers.  At Contraband Camp, newly arrived fugitive slaves were an ideal source of labor for the hospital, and the hospital was an excellent first employer for camp residents.  This readily available population could fill hospital positions such as nurses, and at the same time, the women and men serving as nurses received paid wages for their work thus helping them transition from slaves to paid workers.  Many of those hired as nurses had arrived at the camp sick and exhausted after escaping from their slave owners.  Nursed back to health at the hospital by others with similar experiences, they were hired after their recovery to work as nurses by the surgeon-in-charge.

Contraband Camp survived for over a year before being disbanded in December 1863, but the hospital continued to provide medical care to black civilians and soldiers. By late 1864, it had moved several times from its original location, eventually establishing itself on the site of Campbell Army Hospital, a former army medical facility. No longer under the control of the U.S. Army, Contraband Hospital, now known as Freedmen’s Hospital, became in 1865 an official part of the Bureau of Refugees, Freedmen, and Abandoned Lands popularly known as the Freedmen’s Bureau. With its move to Campbell Army Hospital, Freedmen’s could offer improved facilities for its patients including a better water supply and waste disposal system as well as a 600 bed capacity.  The hospital continued to serve as a medical facility for the African American community in Washington after the war, eventually moving to the site of Howard University in 1868 and becoming the teaching hospital for its newly formed medical department.

Though the Civil War was over, the work of surgeons and nurses continued as hundreds of sick and wounded remained in area hospitals.  Medical care was still needed by the thousands of contraband who had sought refuge in Washington and now made the nation’s capital their home. Many of the physicians who had served in Contraband and Freedmen’s Hospitals during the war continued their hospital work while others sought employment outside the hospital. Charles B. Purvis, who began at Freedmen’s in 1864 as a nurse, became an assistant surgeon in 1865 after earning his medical degree. He remained at the hospital and became its surgeon-in-charge in 1881.  Other surgeons went on to establish medical practices in Washington, D.C. including Alexander T. Augusta and Alpheus W. Tucker. Augusta maintained an association with the hospital as he took on a teaching position at Howard University’s medical department. Some former nurses also stayed on at the hospital while others found employment in domestic positions in the city.

Freedmen’s Hospital continued to serve the population of Washington, D.C. over the next 100 years, expanding its facilities and offering its services to both black and white patients. In 1961, President John F. Kennedy signed a bill that officially transferred the hospital to Howard University.  Moving into new facilities in March 1975, Freedmen’s Hospital was renamed Howard University Hospital and today continues the tradition of providing medical care to the Washington, D.C. community.