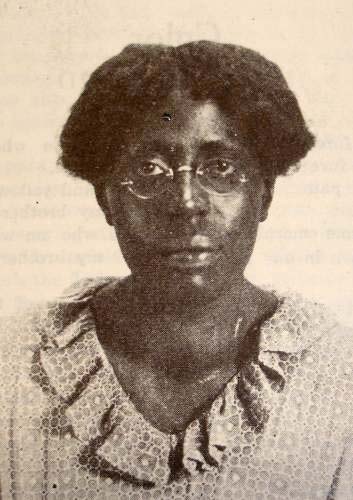 Anita Scott Coleman was a relatively unknown but important western contributor to the Harlem Renaissance.  Born in Guaymas, Sonora, Mexico in 1890, Coleman’s mother, Mary Ann, met her father, William Henry Scott, near Fort Elliott, Texas where he served as a buffalo soldier. He retired and they subsequently moved to Mexico. Following Anita’s birth the family returned to the U.S. Southwest.

Coleman grew up on a ranch in New Mexico, matriculated at New Mexico Teachers College in Silver City, and taught school. Her teaching career ended in 1916 when she married James Harold Coleman, a printer and photographer born in Virginia.

Anita Scott Coleman became a published writer who produced more than thirty short stories as the Harlem Renaissance emerged. Though never a resident of Harlem, she epitomized the goals of its writers. She published her earliest work, thirteen short stories, in New Mexico between 1919 and 1925.  The most famous of these, “The Little Grey House,” appeared in 1922. She later moved to Los Angeles, California in 1926 to join her husband James who moved looking for work two years earlier. There she raised four children, ran a boarding house, and published her most sophisticated stories over an eight-year period between 1926 and 1933. Among her best stories are “The Brat” and “Three Dogs and a Rabbit.” She took a seven year hiatus from writing, but in the early forties published at least five more stories and then in 1948 she published a volume of poetry, Reason for Singing.  A children’s book, The Singing Bells, was published posthumously in 1961.

Coleman published stories, essays, and poems which appeared in national magazines such as The Half-Century Magazine, The Competitor, The Crisis, The Messenger, and Opportunity: Journal of Negro Life during the 1920s and 1930s.  The last three periodicals were major outlets for Harlem Renaissance writers. Her publications emphasize racial pride and issues of import to black women as well as inveighing against white racism, lynching, employment discrimination, and segregation. Her poetry appeared in anthologies such as Beatrice Murphy’s Negro Voices (1938) and Ebony Rhythm (1948).

Much of Coleman’s writing focused on the Southwest.  In “The Little Grey House,” Coleman describes the availability of home ownership for southwestern African Americans. The story “El Tisico” suggests Coleman’s Afro-Latino cultural heritage and her knowledge of the Southwest and of Mexico. The lead character in “Bambino Grimke” is a jazz band manager in Los Angeles. Her essay “Arizona and New Mexico-the Land of Esperanza,” solicited for the series, “These ‘Colored’ United States” by The Messenger magazine, shows her respect for the history and élan of the Southwest.

Anita Scott Coleman died in relative obscurity in Los Angeles in 1960 but her writing reminds us that the Harlem Literary Renaissance was national in its scope and impact.